Spider-Man Will Be In the Marvel Cinematic Universe, Let's Get Cautiously Optimistic!

It seems like just yesterday I was reflecting on a big announcement by a comic book company--oh wait, it was--and here we go with something else! It was announced really late last night/early this morning, so such a degree it took much of the day for the dust to settle, but yes, Spider-Man will officially be able to appear in a movie set in the Marvel Cinematic Universe through an interesting deal where he is not having his film rights sold to Marvel, but leased, in a sense.

No money exchanged hands, instead it's a true sharing of the character that benefits both Sony and Marvel. Spider-Man will pop-up in a Marvel movie (more and more folk are thinking the "Captain America: Civil War" film) and then afterwards will have his own solo-movie that mostly if not completely ignores the original three films and the most recent re-boot (goodbye, Andrew Garfield, you were actually a pretty good Peter Parker despite overall criticism of the movies).
I am, as the title of this post says, cautiously optimistic. This could result in fantastic movies, or become more of a crutch for Marvel--after all, would we have gotten such stellar movies about once lesser-known heroes such as Iron Man or Captain America if Marvel had the ability to make Spider-Man, X-Men, or Fantastic Four movies?

This has moved around the future release date of some other Marvel films, and apparently makes it so that the "Sinister Six" movie will be happening at a later date,but with the new Spider-Man the world will meet in "Civil War" and then follow the adventures of in his own flick. This is exciting and could result in some great story-telling possibilities (Miles Morales would be awesome) but let's be honest about why this happened: 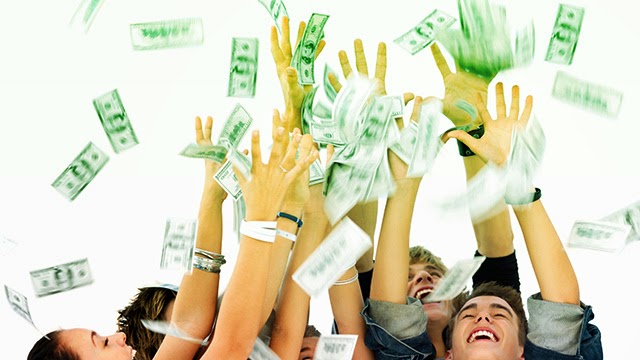 So that everyone at Marvel and Sony can literally bathe themselves in money. So, so much money.
Posted by David Charles Bitterbaum at 10:25 PM