Flashback Friday: Most of What We Knew About, "Street Sharks," Was a Lie and that Should Have Served as a Warning for the Politics of Today 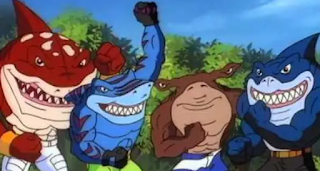 In 2016, a journalist named Jordan Minor came clean about lying online. Now, he never lied in any of his news articles. You see, Minor revealed in the early 2000s when he was a middle schooler he created an elaborate number of fake entries about, "Street Sharks," on a website that chronicled facts about shows. Minor was a big fan of, "Street Sharks," and mixed truths, half-truths, and complete lies in a strange mish-mash of facts and fan-fiction as he typed up entries discussing a female shark named Roxie (never existed) and when Henry Winkler did a voice on the show (nope). Then it sat there for years with other sites mentioning it and people writing in forums about how they remembered those episodes with Roxie. People read something was true so they created false memories to go with the lies. In 2016 Minor blew all that up.

Some people thought Minor must have been lying about lying. Surely they legitimately recalled seeing Roxie on, "Street Sharks," right? Why would someone concoct such an elaborate falsehood about a relatively obscure show? Minor did indeed do it, and it freaked everyone out to see how easily they were had via a bit of, "Inception," if you would. There was a valuable lesson to be gained about how easily we can be fooled into believing a lie, but everyone pretty much forgot about this, "Street Shark," fiasco and went on with our lives. Perhaps that was a bad choice looking at recent history.

If I may seemingly swerve into a new subject, millions of Americans still believe, "The big lie," that Trump somehow won the 2020 election it was rigged to make it look like he lost. All facts show otherwise, but because of the ability to just turn the internet into an echo chamber of lies (and Trump being one of the hugest liars around), so many individuals refuse to accept reality. Just as there were people who argued that Roxie couldn't be a collective figment of everyone's imagination there are still people who scream Trump is our rightful President and we now need to outright nullify parts of the Constitution to put him in power. I honestly don't think it is a huge stretch to say if people on the internet can be tricked into believing in a fictional lady shark they can be fooled into thinking Trump is still President. We are human beings who just seem to often be easily fooled, and when we find others on the web who are also fooled the lies multiply.

If I have a point to all this it is that the old chestnut that you can't believe everything/anything you read online is more apt than ever. Whether you are researching humanoid sharks or a Presidential election you need to always check your sources and make sure the information you're getting is reputable. Otherwise, you might end up going down a rabbit hole of fanart for a character who never even existed. That, or assaulting the Nation's Capitol if you're really impressionable. Jordan Minor warned us back in 2016. I wish we had listened a little better.