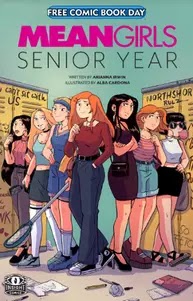 The titles which will be given away for Free Comic Book Day in 2020 have recently been announced (outside of the ones currently marked as being, "Secret," or such). It looks like the usual solid assortment of things geared toward younger readers, older ones, ways to kick-off events or gives a teaser of an upcoming original graphic novel. One thing caught my eye as strange and interesting, however. An official sequel to the classic (in my opinion) movie, "Mean Girls," but as a comic-book titled, "Mean Girls: Senior Year." The flick has had a Broadway adaptation and at this point, a sequel would arguably have to focus on the children of the main cast seeing as how everyone is a good deal older now and their careers have either advanced greatly (Lizzy Caplan is pretty busy lately) or cratered horribly (Lindsay Lohan ain't doing too great).

Having a comic book focused on everyone's senior year where the whole cast can still be able to pass as teens is something that I guess kind of makes sense. It is the best way to get something close to, "Mean Girls 2," even if it isn't on the silver screen. Hopefully, this sampler will be good and get us excited for the full publication.
Posted by David Charles Bitterbaum at 7:35 PM