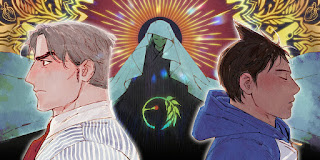 As my blog continues to gain more and more awareness from folk all over the world (hooray for slowly gaining relevancy over these almost-nine years shouting into the void of the internet) I get contacted by various people about their comics and if I'd like to read them. Sometimes it is indie creators and other times various small publishers. One interesting thing that occurred was a man named Michael Song who works for the digital comic platform, "Lezhin," emailed me to ask if I was interested in reading the initial issues/episodes of an English translation of a Korean Manhwa (in Japan it would be called Manga, Korean-based is Manhwa, if you wondered) titled, "Immortal Days." The overall sci-fi concept appealed to me so I eagerly dove-in and read the first eight issues, or, "Episodes."

"Immortal Days," is a story about a world where immortality was discovered. People found way to live forever and now basically everyone never dies. You get older but don't get ill. You can be shot, stabbed, blown into pieces, or anything else drastic but your body will eventually heal and you'll be good as new (although you might need assistance gathering body-parts if you are blown-up). In a clever twist this hasn't ushered in some golden-age of prosperity and enlightenment--no, people are continuously self-centered and focused on their own well-being. There is still crime, with the comic casually mentioning it actually got worse because with murder no longer being a concern thieves have to basically give a person what would in the past have been deadly wound to be able to rob them. The world gained immortality and now that people can live forever they're just extra big jerks knowing there aren't consequences for being violent at one another. It is a plot element that is both darkly hilarious and kind of depressing. There is a twist however, in that with any drastic changes in biology there are bound to be mutations. 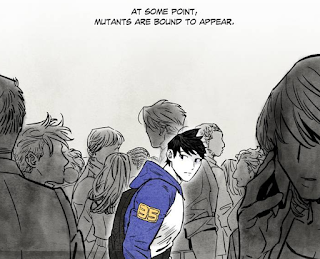 Myeol, or, "Fall," as his friends call him is a mortal. A relatively young guy, he has had to train his body to withstand all kinds of danger because he can die. In this world where people will fall from the top of a building or can be hit with a bunch of bullets and shrug them off Myeol can be bruised, scarred, and killed. He meets a private detective or, "Troubleshooter," as they called named Phil who is astounded to learn he and Myeol both share their unique gift/curse of mortality. This results in Phil hiring Myeol as an assistant both because Myeol's physical skills are impressive and because Phil admits as much of a removed and tough-guy act he puts on he's lonely and a bit fearful being able to die. These initial issues set-up much of this plot and then have the two embarking on a case to figure out what kind of trouble a cult focused on bringing about the extinction of humanity (e.g. making everyone no longer immortal) could be trying to cause.

Creator of the series, Heo Gin Gae, gives readers some fantastic artwork in the comic, with moments of violence especially being both comic and a bit grotesque. People get blown-up after all, but as nobody (besides our main characters at least) can die, it results in some strikingly silly imagery such as a torso with just a head hollering to an EMT how an arm with a star tattoo belongs to them. The scenes of action and fighting are delightfully frantic, and the comic's mixture of heart, humor, and a dash of sadness result in a stellar plot to go with the great art. My only real complaint might be how I would love to see more of this kind of world where people are now immortal, and get some details about that. I mean, if people can't die but still get hungry, will you never starve to death but just be miserable? Has immortality resulted in a lot of crowding in the world? It is such a clever concept that I want to know more about it! As this web-comic is an ongoing that will be updated weekly (it launched with the initial eight episodes/issues I was able to review) I bet this plot-point will be explored further, and I'm excited for that.
I really enjoyed, "Immortal Days," and eagerly rate it 4.5 out of 5 stars for the eight episodes/issues I have read. I would encourage people to try out the comic-website Lezhin (it can be utilized in Korean, Japanese, or English) and buy some issues of, "Immortal Days," in addition to checking-out the wide-range of titles this website and its web-reader provide (I did not know of Lezhin till recently, but know of some other Manga and Manhwa sites and am aware these can be pretty popular). I'm pleased to have been reached-out to by Michael Song and look forward to reading upcoming episodes/issues of, "Immortal Days," as well as other cool-looking comics on the Lezhin site!

Note: The ability to access and read, "Immortal Days," on Lezhin was provided for the purposes of review.
Posted by David Charles Bitterbaum at 1:59 PM