"It Had To Be You," by Nick Edwards is a Wonderfully Dark and Trippy Read 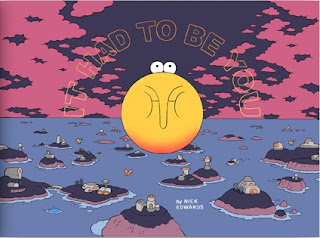 I love a lot of what Germany-based publisher Rotopol puts out (they publish internationally so much of their work is also in English, which I appreciate as my German is nicth gut). One of the newest comics to be published by them (it officially comes-out May 11th, 2019) is the delightfully dark and equally psychedelic book, "It Had to Be You," by creator Nick Edwards. The comic follows an assortment of vaguely human-shaped characters who are, "Friends," in arguably the loosest sense of the word. Much of the comic is focused on Ob, a very nice circular gent who considers a noodle-like fellow named, "Eck," a great friend along with the melon-sized, "Alm." The problem is that Eck is prone to fits of rage and just as likely to attack someone who offends him...or if he's in a better mood he might just steal a supposed chum's car. Alm means well but is a habitual loser himself too. Oh, and there is  a pet named Ubu who Ob acquires later in the comic that seems nice at first but is honestly just plain mean too. This may sound depressing, but within this comic it is actually all quite hilarious.

Edward's has worked on numerous cartoon programs according to his bio-page I read for the comic, so he clearly knows that the tonal clash between cute-and-nasty is one that can be quite funny. The world of, "It Had To Be You," is full of adorable and squishy people, animals, and objects, but is actually a pretty brutal place. It has great technology that makes life better, but everyone is just nasty no matter how swell life is and how cute they look. Yes, some people try to be nice, like Alm, but it usually ends up failing--such as when Alm bakes a cake for Ob upon learning Ob is ill and needs to go to the hospital, Alm ends up getting the cake smashed in his face via an accident both equally tragic and humorous.
Another interesting thing about this world is even if everyone is kind of awful, some residents are pretty optimistic. Ob can only smile and remind himself how he considers Eck a friend whenever Eck treats him terribly, and Alm doesn't let any awful incident that occurs to him stop his positive thoughts. It is both sweet and kind of tragic to witness these hopeless happy characters stuck in a world that's cute at first glance, but full of sucky people.

As I mentioned, Edward's gives us some incredible art in this comic. His creations are cute and fun-looking but have that glimmer of mischief in their eyes that is made quite evident upon one's reading of the book. His characters look just humanoid enough to be recognizable as living beings but still have all kinds of abstract shapes and features that make them incredibly striking. The mixture of recognizable-and-avant-garde works perfectly and gives the art a perfect abstract touch whilst still being easy to follow for readers. It's fantastic stuff.
Between the extremely funny (and dark) story and some stupendous art I loved, "It Had to Be You." Nick Edward's has spent a lot of years in the field of animation/drawing/artwork and it shows through his skillful creation. I unquestionably rate this comic 5 out of 5 stars. I want to thank Rotopol for providing an issue for the purpose of review and would encourage you to get yourself a copy to read and enjoy via pre-ordering it on the Rotopol website or from any other fine book and comic retailer.
Posted by David Charles Bitterbaum at 1:22 PM

Email ThisBlogThis!Share to TwitterShare to FacebookShare to Pinterest
Labels: comics, funny, It Had to Be You, Nick Edwards, original graphic novels, Rotopol