I Worried This Would Happen: "The Black Monday Murders," Further Delayed 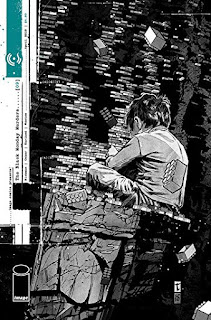 When it was first being teased how Jonathan Hickman was returning to Marvel (later it was revealed he is doing two mini-series about the X-Men) I was intrigued but also had one overriding concern. Namely, I was worried this could delay, "The Black Monday Murders," even further. Sure enough, it has been reported that the supposed release date for issue #9 of the Image series--the start of the final story-arc, suddenly has disappeared into the ether. Diamond, the main/basically only distributor of comics had the book listed with a tentative release date, but now...nothing.

This is exactly what I was worried would happen seeing as Hickman already is notorious for delays regarding his books. Now I just have to wait even longer to see what he and illustrator Tomm Coker have waiting for us. Perhaps this series will eventually conclude, but for now the waiting game resumes.
Posted by David Charles Bitterbaum at 2:24 PM