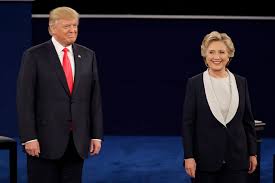 The Presidential Debate today between Hillary Clinton and Donald Trump just wrapped a short while ago and had me wondering how in the Hell we've come to this point. I have some scattered thoughts to offer you.

After those tapes of Trump saying awful thing about women leaked I didn't think this debate would be smooth-sailing, but Dear God I had not clue it would be this ugly.

I've never heard a U.S. Presidential candidate threaten to throw the other in prison if they win.

I've also never heard Anderson Cooper sound as annoyed as he did tonight.

Yet again Trump interrupted Hillary Clinton a bunch and she kept calm and didn't interrupt back. It made her look calm and he appeared to be an emotionally-volatile orange.

Thank God Trump didn't take it upon himself to go and grab Hillary Clinton by her, "Pussy [his words, not mine]," when she was making him extra-angry and he lurked behind her ominously.

Trump loved to keep saying the moderators preferred Hillary Clinton over him and were giving her preferential treatment, which is probably one reason Anderson Cooper sounded like he was ready to yell, "Fuck this, I'm going home," and leave.

All of Trump's comments about Bill Clinton might really hurt Bill's chances at getting elected in 1993, I say with an eye-roll. Seriously though, Bill isn't running this time, she is, and Trump is the one running for his party and he disrespects women horrifically.

There was plenty of talk about Trump's taxes and Clinton's emails. Russia was discussed too. Generally it was more-so a display of why each candidate thought the other was as terrible person.

Trump's go-to subjects seemed to be: Emails, locker-room talk excuses, Bill Clinton, how his taxes are Hillary's fault, and sniffing.

Trump loved to say we are handling Syria horribly but never offered any actual ideas.

I feel like Bernie Sanders was somewhere watching this debate and thought, "You know, maybe it actually was for the best I didn't get nominated to this shit-show."

For a debate about answering questions from voters I feel like we barely got through any questions and instead got to watch Trump and Clinton rattle-off their usual talking points when not vaguely-pretending to actually address queries.

When it was announced a, "James Carter," had a question during the debate my wife said quickly in a joking tone, "Wait, they've got Jimmy Carter there too, and he said he was undecided?" My wife has a quick wit.

I wondered if abortion rights and marriage-equality would come-up and towards the end they finally did. Hillary's statements were great, and Trump sounded like a moron praising the horrifically crooked and terrible Antonin Scalia as if he ever was anything other than miserable person. Also, Trump avoided talking about marriage equality or abortion rights and went with that old refrain of how, "The Democrats want to take away your guns!"

Why did Trump throughout the entire debate make it sound like all black people live within some kind of inner-city Hellscape full of non-stop violence? It was grossly offensive.

That last question though, where someone asked the candidates to say something they liked and respected about each other! Damn, give that audience member an award for, "Best Question."

In conclusion, this debate was like bad sex--you're exhausted and don't feel at all satisfied. I feel the way my favorite angry-faced feline feels. Take it away, Grumpy Cat: 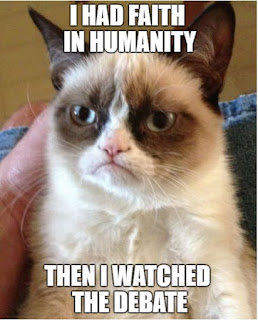 Good night, and may God/Jesus/Mohammed/Budda/etc. help us all.

Disclaimer: I have made it no secret I support Hillary Clinton and think Donald Trump is an idiot, so clearly my statements are influenced by that.
Posted by David Charles Bitterbaum at 9:48 PM