A Review of the Stellar, "Secrets and Shadows" 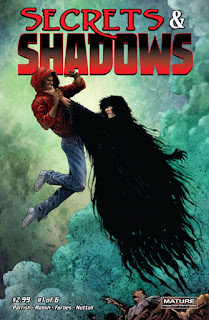 As readers may recall, I met Jon Parish at the 1st-ever, "Saint Louis Comic-Con," and picked up all six issues of his mini-series, "Secrets and Shadows." I was eager to read it because when I met him at the con I was struck by his enthusiasm. Having gone to a number of conventions I'll often meet creators who don't seem that pumped to talk about their comic. Jon was the opposite of that. With him it wasn't, "Let me tell you about this thing I made," it was, "Let me tell you about this awesome thing I created and which I want to tell you about because you'll love it too!" Sure enough, I read, "Secrets and Shadows," and found it to be a fantastic book.

A superb comic reminds you of other great works while standing proudly as its own work as well. That is the case with, "Secrets and Shadows.". It takes place in a world where heroes exist but have become a bit of a corporate entity, with many operating under the domain of a cruel business--so a bit like, "The Boys." It also features multiple generations of heroes living in a world where much of the, "Old days," of super-villains has passed and everything is actually pretty calm and peaceful (Marvel and DC have both done, "What-If," and, "Elseworlds," books that have touched on this). That said, "Secrets and Shadows," takes these ideas and uses them to create its own interesting tale of a world where there are plenty of heroes, but they are mostly unneeded and incorporated...at least until the heroes start getting murdered.
A young man named Joseph is the son of the greatest hero ever, "Dark Sun." "Dark Sun," has basically gone into hiding ever since his wife (and Joseph's mother) died. Joseph's brother has super-powers and is a big-name hero but Joseph doesn't have any abilities...or so he claims. At the end of the first issue we see Joseph has powers, but to much of writer Jon Parish's credit, he holds off until the sixth issue for us to see Joseph finally let loose. Joseph is easy to relate to and comes off as a well-rounded individual. This is good as some of the other, "Heroes," are anything but that, to the point some former villains who quit long ago end-up playing a heroic role themselves.

My only complaints about the book would be that the art in the first-issue is a bit too scratchy and unclear, but that is okay because as of the 2nd issue and all the way through to the end the artist changes to Dexter Wee and he does a really solid job showing-off the explosive action as heroes and villains go toe-to-toe. Also, the comic will at times jump-around a bunch in time, doing the whole, "1 hour ago," "3 weeks ago," etc. routine and that can get a tad confusing. Other than those two irritants (and one gets fixed after the 1st issue) this was some awesome reading. 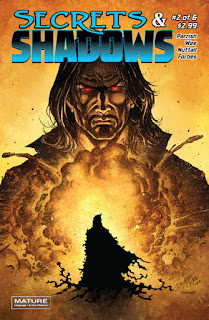 At the convention Jon Parish got me really excited to buy and read, "Secrets and Shadows." I'm pleased to say I enjoyed the book just as much as he promised and would recommend without a doubt you check his website out here and visit his web-store at this link. I without a doubt can give, "Secrets and Shadows," a rating of...
5 out of 5 stars.
Posted by David Charles Bitterbaum at 4:43 PM