Flashback Friday/Film Friday: "I Am Legend," AKA Revisiting A Great Movie Ruined by an Awful Ending (And Saved by an Alternate One) 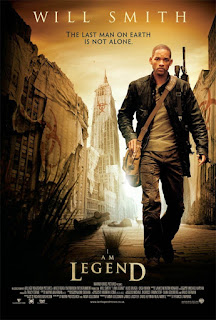 Today I'm going to do a combination Flashback Friday and Film Friday post talking about a movie that I still think about from time-to-time. That movie is, "I Am Legend," and came out in 2007. I mean, at least the version I am going to discuss did. The novel it is based on has been adapted numerous times, but I really liked the 2007 version with Will Smith for a variety of reasons (acting, imagery, atmosphere, etc.) and would consider it a masterpiece, but for that damn, "Official ending." When I saw the movie in theaters I actually felt really let-down by the ending before I learned an interesting fact I'm going to discuss in a moment. Considering how I'm going to be talking about the conclusion of the movie you can imagine this post contains spoilers, but this piece of cinema seriously came out almost 10 years ago; if you haven't seen it now do you really still need to fret?

Okay, so its 2009 or so (in the movie, it was still 2007 when it came out) and least 94% of the world's population is dead due to a mutated virus. The other 5% turned into monsters known as, "Darkseekers," who burn in UV light (so the sun is a no-go) and maybe 1% of our planet was immune but possibly everyone who survived was killed by Darkseekers or other animals the virus mutated. Everyone except for Dr. Robert Neville played by Will Smith. When New York City was quarantined he stayed behind to try and find a cure for the virus using his immune blood. Since  some years ago when NYC was isolated (which we witness in flashbacks) Robert has been working to try and find a cure by capturing Darkseekers and running tests on them. Long story short, he abducts one Darkseeker female and finds a potential cure, but then his dog--one of his sole companions for much of the movie--dies in a heartbreaking scene.
This scene occurs because it seems the Darkseekers have set a trap for Robert and his dog gets infected by some mutant creatures when defending Robert form their attacks. Robert is so sad about this he tries to kill himself by going out in the night to fight the Darkseekers...only to have a woman and her son who heard a radio message he's been broadcasting since the world ended rescue him. The problem is when they take him to the safehouse which he instructs them to drive to it seems the Darkseekers followed them and now know where to strike because the next night they try to break into Robert's safe-house and the lab in the basement...and here the movie enters the, "Theatrical ending," I hate.

So, Robert gives the lady and her son a vial of the cure and blows up his lab, killing the Darkseekers before the lady and her son apparently go to Vermont and find a base that was rumored to exist and is full of immune people whom they give the cure so as to help cure all the other infected creatures and humans who are still alive. Simple and dumb. But wait! The ultimate cruel twist and interesting fact I told you I would share is that an alternate ending exists that is so, so much better and was in fact the original ending before test audiences complained it made them feel bad. In the other ending the Darkseekers arrive at Robert's lab, but he realizes they are actually after the female Darkseeker he kidnapped. He gives her back to them and they leave his lab peacefully, a shocking twist for sure.
At this point Robert realizes that the Darkseekers are intelligent beings and he has been doing horrific research in his effort to find a cure on smart, creatures capable of reasoning and feeling pain, sorrow, love, and so forth. This ending explains how the Darkseekers were smart enough to set a trap, and why they would even do so. Before the credits roll we see Robert, the lady, and her son driving-off to try and find other survivors (I guess at the military base we saw in the official ending) and we the viewer get to do some deep thinking about concepts of humanity, ethics, and the like.

Which ending sounds better? The one where Robert is pointlessly treated as a martyr and the Darkseekers remain portrayed as idiotic monsters, or the conclusion where we get to question if maybe, just maybe, Dr. Robert Neville is the monster? I know which ending I prefer, but the cynical side of me realizes that Hollywood probably thought people wanted the watered-down finale test audiences clamored for. I'm not the only person who thinks the alternate/original ending is better, with others commenting how test audiences really should have been ignored in this case.
"I Am Legend," is a stellar movie with an awful ending, but as a silver-lining actually has a superior resolution that can easily be watched as a special feature on DVDs of the film. If for some reason you haven't seen, "I Am Legend," or saw it in theaters and therefore missed the actually good ending, I would encourage you to buy/rent/borrow a copy. However, when you get the scene where the Darkseekers are about to break into Robert's lab please, Dear God please, stop the movie, go to the menu screen, and then play the original and incredibly better ending instead of the steaming pile of garbage that is the theatrical conclusion.
Posted by David Charles Bitterbaum at 11:02 AM

Email ThisBlogThis!Share to TwitterShare to FacebookShare to Pinterest
Labels: film friday, flashback friday, I Am Legend, internet, movies, Will Smith