Unimpressive and Boring AKA "DOOM," Single-Player Thoughts Based on One Hour of Playing It 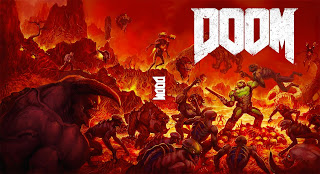 I discussed my feelings about the multi-player mode of, "DOOM," when I tried the beta and mentioned I would discuss single-player once it came out. Well, I rented the game for my Playstation 4 and spent an hour playing the mode for individuals. I can conclude having given this fourth entry in the series a shot that I am just not the demographic for this game. What is the demographic? Thirteen year-old boys (and some girls).

Seriously, if you were to ask a thirteen year-old young man (and some young women) what would be in the perfect game this might be it. It's got blood & gore, demons, heavy-metal music (some kids may not like that, but some would), a bad-ass space marine who punches stuff, big guns, and did I mention the blood and gore? If you knock an enemy off its balance with some gunfire you can run-up and do a really gruesome finishing-move too, what more could you want? I'm not by any means opposed to my games being violent--I love Fallout 4--but this title literally opens with your character on a satanic stone-table, smashing the head of an approaching demon-zombie into the stone, and then otherwise grunting and killing stuff with nary much plot development. If some games are well-prepared meals of fun and enjoyment, this is a burger saturated in bland ketchup. 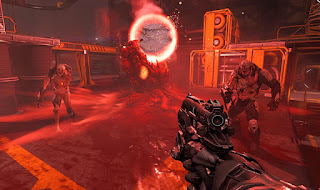 I mean, there is ostensibly a plot, but whereas, "DOOM 3," was an at times tense and creepy horror-thriller, this is just flat-out, "Run into a room, shoot a bunch of stuff, go to the next room," kind of game. It confuses being, "Edgy," with guts flying all over the place to the tune of electric guitars shredding. It makes me think about how I read an article discussing people being, "Aged-out," of the gaming industry and how I thought such a thing wouldn't happen to me. Well, as soon as I started playing the single-player mode of, "DOOM," I felt like I'd been aged-out with a vengeance. It was dull enough that after an hour I had to stop before I felt like my life had been too wasted.

The graphics were fine, the controls functioned well, but this just wasn't a game for me. The young boy I used to be might have marveled at sticking my fist in a, "Gore-nest," and ripping out its demon-heart in a blur of viscera and gross sounds, but the grown-me I've become just finds this dreary and asks, "We've established games are art for this?" Seriously, this is like the equivalent of a dull horror movie that thinks blowing its money on special-effects is the answer to all the other flaws, it looks nice but is otherwise laughable. This was unimpressive and boring, I just wouldn't recommend it. Keeping in mind I only played the single-player mode for an hour and this is by no means a thorough review, I give this...
1 out of 5 stars.

I gave it that one star for thankfully handling well and looking pretty. At least multiplayer still has some fun to it, but with so many good multiplayer games in existence or coming out shortly, why bother?
Posted by David Charles Bitterbaum at 10:20 PM