Image+ Discussion & Review AKA Was that "Image" Magazine-Sampler Any Good?

A Magazine With Comics/A Big Comic with Magazine Articles 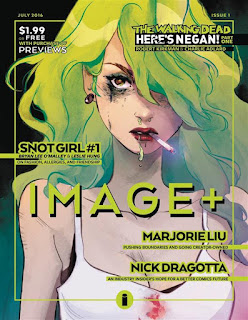 Some months ago the publisher Image announced they would have a special magazine with comic-excerpts to help promote upcoming titles and tie-in with certain ongoing ones. Called "Image+," and pronounced, "Image Plus," it was to be sold with the popular, "Previews," magazine and be given away for free with any purchase of "Previews." Now, many stores give people with pull-lists, "Previews," for free so some stores just threw that in too, or had customers buy it when it came out this April. Now, note that it says, "July," because solicitations for comics are generally released two months in advance, so this is the April issue for July comics (it is admittedly a bit confusing).

A Digression About Underwear Models
Upon hearing about this new monthly title the first thing I thought of was the Victoria's Secret Fashion Show. Yes, this one:
Please, let me explain.

Back in 1995 when I was but a wee grade-schooler the first-ever Victoria's Secret Fashion show occurred on television screens. My body hadn't yet been flooded with the hormones of puberty so I saw little appeal in scantily-clad women at the time, but on the news programs I enjoyed watching (because I was a weird kid who watched the news and cartoons, kind of like how I'm a weird adult who does both now) I heard a word that stuck with me. The term, "Advertainment," was used.

Advertainment is advertising that is also entertaining. The main goal is still to sell the consumer a product, but by making the ad something people actually want to consume because it is fun, exciting, etc. you have created advertainment. The Victoria's Secret Fashion show is a piece of advertainment. It appeals to the eyes of men who like women (and women who like women) while at the same time emphasizing, "You know all these great undergarments? You can buy them!"
Back to the Review Itself
This brings us back to, "Image+," which based on my previous paragraphs you now understand I'm getting at could be called advertainment. A magazine chock-full of interviews with creators who have books coming-out with Image currently (or in the future), previews of comics, and special tie-ins that can only be found in the magazine (The origin of Negan from, "The Walking Dead," for example), "Image+," is a way to put out content that looks editorial, but is at its heart advertising. This is perfectly okay though!

Yes, you heard me right, it is fine for Image to put out a magazine that is basically one big advertisement and charge us $1.99 for it (or possibly give it to us for free, but stay with me here), because as the end of the day it is in fact entertaining. After all, advertainment has failed it if isn't fun, but, "Image+," is pretty snazzy. The interviews may basically be fluff, but no more-so than supposedly journalistic websites such as Comic Book Resources (yeah, they mostly suck), and the samples of upcoming comics are substantial in their content. Plus, a wide rage of creators are represented from writers and artists, to the amazing colorist Jordie Bellaire.
Conclusions
"Image+," is basically one big advertisement, but it is a fun and good-looking ad. You get a lot of content for your $1.99 if you bought it, and should you get the magazine for free, that's even better! I would say this accomplishes Image's goal of promoting their various works, as I now have more knowledge about and interest in titles which I had up until now either not heard of, or had minimal plans to read (Bryan Lee O'Malley and Leslie Hung's, "Snotgirl," has me quite intrigued). If there is any downside to this magazine, it is that some of these comics look so good blown-up to a larger size that it will be a bit sad when they are released in just a standard comic-book format.

As a piece of entertainment, "Image+," succeeds, and as an example of advertising it excels. Should someone buy it the price is a whole dollar less than a single $2.99 comic (and more and more are $3.99 these days, so that seems even better), and the fact that many people will get it for free when they either buy, "Previews," or simply have their shop hand it to them at no charge means that Image will undoubtedly get a lot of eyeballs on their titles that otherwise may not have drawn as much attention--and this assists them in promoting the heck out of their already sure-to-be-popular books (the aforementioned, "Snotgirl," will probably be a big draw thanks to O'Malley's pedigree). It's a fun magazine/comic sampler. I would check it out.
5 out of 5 stars.
Posted by David Charles Bitterbaum at 5:42 PM