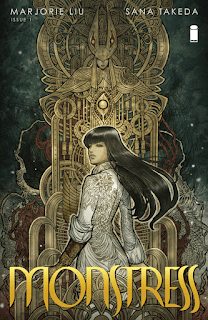 I've written previously about how there is a comic called, "Sex Criminals," that I should like, but had to confess I did not. It was a hard thing to admit but I felt better afterwards. Therefore, I feel the need to admit what the latest comic is which it seems like everybody adores, but I don't find as entrancing.

Yeah, I'm just not feeling, "Monstress," like, at all.

Written by Marjorie Liu, the first issue was promising. It established this rich fantasy world, had some suspense where the young protagonist named Maika hinted at having scary powers and then released them, heck it had talking cats too ! Oh, and the art by Sana Takeda is just plain incredible in every issue. Seriously, I don't always like fantasy as much as science-fiction, but Takeda's artwork was probably the main reason I've stuck with this comic as long as I have. However, I'm five issues in now and it has become glaringly obvious, "Monstress," just isn't a book I particularly enjoy outside of ogling the amazing art.
I'm not sure if it is because the fantasy world that started out as exciting now just seems confusing with strange story-element upon story-element I don't understand, the fact that I find the plot to be crawling along a bit, or what the problem is. I do know that when the time comes to read, "Monstress," I lately sigh and go, "Alright, let's get through this." I just don't have funds to be spending on comics I talk that way about, so I should probably quit this title.

I feel a bit bad dropping, "Monstress," because a part of me thinks it might start impressing--after all, Marjorie Liu is a great writer, and I mentioned the art is stellar. That said, I just don't feel like taking that gamble and if the book does in fact become a spectacular piece of fiction as it goes along I can always pick up the trades someday, right? 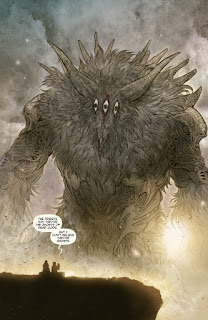 That's my confession about how despite the great writer and stupendous artwork I just am not a lover of, "Monstress." It never feels quite right to read a comic you think you should adore, but just can't summon those feelings towards. "Monstress," is a very competent comic from a technical aspect, as I've thoroughly established, but my heart just isn't in reading it. I look forward to checking out other future works by Liu and Takeda for sure though!
Posted by David Charles Bitterbaum at 8:48 PM