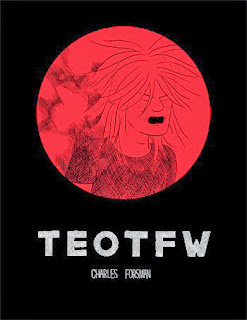 While I edited the title slightly in the subject-line for those with delicate sensibilities, this book is in fact called, "The End of the Fucking World" or "TEOTFW" for short. Originally released as a series of micro-comics through writer/artist Charles Forsman's "Oily Comix" mini-publishing line, I picked up the book which collects all the segments and was recently published by Fantagraphics. This is best described as a twisted, "coming of age tale," that focuses primarily on a young boy who is a borderline (if not complete) sociopath named James, and his girlfriend who desperately wants to understand him, Alyssa. Two youth mad at the world going around America, what could go wrong?

This is an interesting story with 16 parts, half of which are from James point of view, and another half are narrated by Alyssa. "TEOTFW" shows James and Alyssa going on a road-trip of sorts in an effort to both help James get away from his horrendous father and to help Alyssa potentially find her estranged one. Along the way various people are met, some surprisingly nice but most out to hurt or take advantage of our young couple. 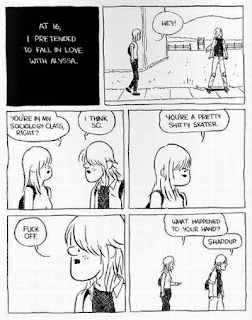 James clearly is very disturbed in his descriptions of how from a young age he started killing animals, and almost had the urge to kill Alyssa but instead, "Tried to let her in," showing that  at least maybe he isn't all bad. Alyssa is an interesting person too but doesn't seem to get as fleshed out during the story, instead being relegated more to a supporting-character role despite having half the book take place from her point of view. Things start to get more dangerous and violent when James and Alyssa by chance encounter a married couple who are in fact full-blown sociopaths. In my desire to not spoil too much I will merely say that from there things escalate quickly and don't necessarily end well for everyone.

Despite the story being quite dark, the art often has a nice light and clean feel. Forsman draws in a minimalist style where every line and dab of ink seem purposeful and never overstated. The often carefully-constructed geometric panels that make up the pages cause the comic to often feel like one of those daily strips you could find in the newspaper--albeit a very tragic one. Despite almost sometimes seeming a little too cute, in the end it works wonderfully for the story. 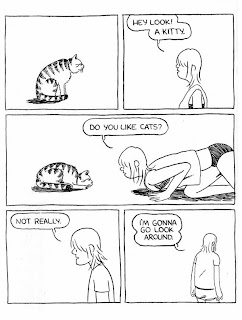 "TEOTFW" is a comic that is equal parts interesting and sad. As a portrait of disaffected youth and what it might be like to be (or fall in love with) a sociopath it is superb, and I would recommend it to anyone who is interested in a dark and engrossing story with intriguing art.
4 out of 5 stars.
Posted by David Charles Bitterbaum at 7:28 PM

Email ThisBlogThis!Share to TwitterShare to FacebookShare to Pinterest
Labels: Charles Forsman, comics, rant-reviews, The End of The Fucking World