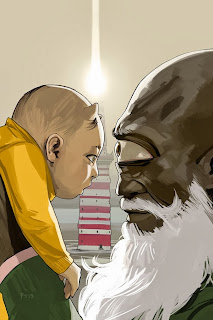 "Saga" is an amazing comic. Yeah, I know, I'm not rocking any boats making that statement. Seriously, who would argue "Saga" isn't the bomb-diggity? Issue #9 was the first issue of "Saga" to come out in 2013 and then after the 12th issue we had another painful break-period (which it seems will be happening after every arc so as to allow each issue within said arcs to come out on time) before the series resumed again and continued being superb.

"Saga" is many things. It is a space-opera, a love story, a tale full of humor yet also heartbreak, and most importantly it is a damn good comic book. Brian K. Vaughn is one of the best writers around, and his getting relatively-newer talent Fiona Staples to illustrate this book takes an already great comic to an unfathomable levels of awesomeness. Between Vaughn's alien worlds and Staples incredible depictions of otherworldly creatures and traditions, "Saga" is just as much about fascinating characters as it is an incredible world.

When Vaughn has worked within the constraints of familiar universes he has made delightful works but has also been somewhat limited. Yeah, "Runaways" was awesome, but because it took place in the Marvel Universe he only had so much freedom, and when he finished the book other writers took on the characters in their own comics to varying degrees of success and failure. With his works that are solely controlled by him and the rest of the creative team such as "Ex Machnia" (which I've also adored) however, you get unparalleled creativity. Aliens with televisions for heads, space-ships that are also trees, magic spells powered by secrets, these are just a few examples of the amazing ideas we witness within "Saga" with incredible art to match the tale.
At the end of 2012 "Saga" found itself on plenty "Best-of" lists, having started so strongly. I feel it is a testament to the quality of the book that it continues to be brimming with quality and impressing readers with its world and characters. Many books start strong but then peter out, but "Saga" has been continuously marvelous. Honestly, this book is so good in the process of writing this article I have had to look up synonyms for saying something was splendid so that I wouldn't just keep saying, "This book is awesome," a hundred times. The fact I needed to look up more words to express the quality of this book should be enough proof that Saga is worth reading. It isn't even too far along, you can pick up the first two trades, a number of single-issues and you will be all caught up with this majestic series.

The enjoyment and wonder I feel when reading every issue of Saga makes this easily my favorite series of 2013, and one you should read too. I just want to thank Brian K. Vaughn, Fiona Staples, and Image comics for putting out such a resplendent work. And yes, I did find the word "resplendent" when I was searching for synonyms.
Posted by David Charles Bitterbaum at 3:29 PM