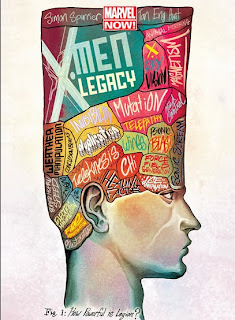 I've made it no secret how much I have enjoyed reading "X-Men Legacy" since it was relaunched with Si Spurrier as the writer and Tan Eng Huat as the often-times artist. While I have loved the run so far (and as it sadly comes ever closer to finishing), my favorite issue would have to be the 9th. When you open your issue with the main character and his romantic interest finally kissing, and then follow that with a joke riffing off of Watchmen you know things are going to get even wilder by the end. 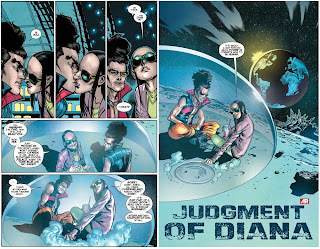 Basically, our protagionist David Haller (don't call him "Legion") is on a date with Ruth Aldine on the moon (also known as "Blindfold") and tells her about how he's decided because the X-Men are always so reactive to threats, he has decided to be proactive and go stop the potential destroyers of mutant-kind before they get a chance to act. That is the general plot of this 2nd arc of the series where a bunch of seemingly unconnected events take place until David Haller learns how much of the newly brewing anti-mutant sentiment is due to some clever subterfuge by the Red Skull. This issue hasn't gotten us to that point though, but deals with a very real threat.

The one problem I have with the issue is that the threat kinds of strains credibility--its the golden-age era version of the character "The Vision" known as "Aarkus" whom despite other comics having established him as living on Earth, for this comic has been living on the Moon, popping over to Earth now and again to pick up some books to pass the time. There, he has apparently picked up the book of Ruth's deceased (well, sort-of deceased) brother and will be launching unforeseen attacks on mutant-kind due to reading about the alleged danger mutants pose that will wipe them out because really, who would expect the Golden-Age Vision (which is kind of why it makes some sense to have this random threat occur, but it still seems odd)?

The threat isn't so much the point of the story though, as it is the fact that Ruth finds the idea of David acting to stop Aarkus before he even does anything wrong...at which point he reveals he actually already took action before even brought her to the moon--which also riffs a bit on "Watchmen" with its famous, "I did it thirty-five minutes ago" line. We as readers feel both disturbed by David's actions, and also see the reasoning behind what he did. It firmly illustrates how David might have the right idea in trying to be proactive in dealing with threats to mutants, but in the process is going to do some things we as readers will be extremely uncomfortable with.

Tan Eng Huat is just as equal a factor at making this issue be one of my favorites, with his style of illustrating being both beautiful and grotesque in how he draws the human form and depictions of David's incredible powers.

Between the amazing story and terrific art this is without question my favorite single issue of a comic in 2013.
Posted by David Charles Bitterbaum at 5:02 PM