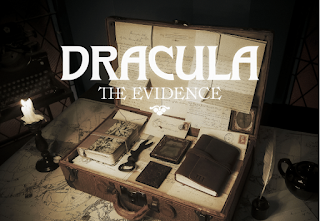 I am on a number of press email lists due to being a hoity-toity big-name journalist (not really, basically most press lists I get on I begged for access to). One of them is the snazzy boutique publisher Beehive Books whom have published some neat comics, books, and so forth thanks to the financial support Kickstarter backers can offer to ensure funds from pre-order sales. One current project they have is a clever take on Bram Stoker's classic book, 'Dracula," which they are calling, "Dracula: The Evidence." Basically, they've taken the book and turned it into a creative multimedia experience. With faux-journal entries, tools, phonograph records, and an assortment of clever, "Artifacts," that tell the story of the book in a wholly unique way. I'm a big fan of this kind of stuff, having always loved when publications such as, "McSweeney's Quarterly Concern," would switch things up and instead of simply doing a book release their latest edition as a fake batch of some stranger's mail, or a pretend newspaper.

Beehive Books actually teamed-up with the great grand-nephew of Bram Stoker, Dacre Stoker so as to get his family's blessing as well as their assistance and has been working with Paul Kepple, a designer known for his wild work on the also uniquely-designed book, "S." which was done by J.J. Abrams and Doug Dorst. So yeah, some great people have been involved in making this really cool interpretation of, "Dracula." Now, it is pretty expensive to get one of the full, "Experience," versions--$350 for early-bird backers and $400 for everyone after, with the price going-up for even cooler cases and such. Still, if you've got the scratch to spare or want to back it at lower levels that still get you snazzy items ($25 for an all digital-version is quite reasonable). Check the Kickstarter campaign out and back it if you want. I know if I had the money I'd be shelling it out for an, "Immortal Edition," to dive into the classic story over again in a wholly unique way.