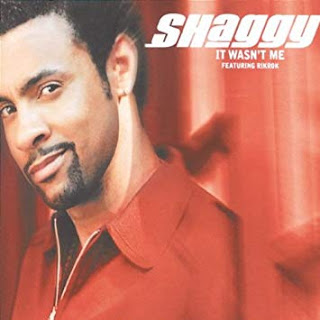 This news story made me laugh more than it should've. Basically, the singer Shaggy had someone impersonate him on various websites and apps in an effort to get fans to give him (the scammer, not Shaggy) money. Now, Shaggy has had a number of hits, but one of his most famous ones features him advising a friend who is caught cheating in the middle of the act by his girlfriend to simply claim, "It wasn't me." Even though, "We were both butt naked, banging on the bathroom floor," he just has to swear up-and-down it somehow wasn't him, according to Shaggy, and everything will work-out. Well, considering how much Shaggy endorses lying to get out of trouble I do honestly want to believe him when he says, "It wasn't me," but I have to admit I have my suspicions of a man known for rapping, "Never admit to a word," of any sleazy accusations.

I'm being silly of course, Shaggy is a successfully wealthy man and actually quite honorable (he served as a Marine during the Gulf War), so in the song, "It Wasn't Me," he was just playing a character as opposed to actually endorsing cheating, lying, or scamming. That said, there is something outright hilarious to this whole ordeal where someone has literally posed as Shaggy to trick people into giving away money and Shaggy himself has to say, "It wasn't me, for real!"
Posted by David Charles Bitterbaum at 9:12 AM