Hearing This Comment About the Rating for The, "Bloodshot," Movie Irritated Me... 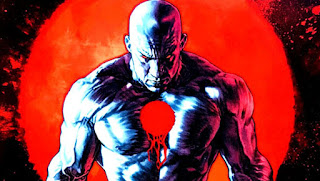 The upcoming, "Bloodshot," movie starring Vin Diesel will most likely be rated PG-13, which does not irritate me. Go ahead and make whatever kind of movie you want and if your goal is to fall within a certain standard of the MPAA then fine. Yes, the MPAA is not an actual government organization and movies do not have to be rated thanks to having the 1st amendment to back them up, but most theaters refuse to screen movies not graded by the agency that is by all reasonable accounts corrupt, pointless, and a mess (everyone seriously needs to watch, "This Film is Not Yet Rated," to learn how terrible the MPAA is). I have no problem with the people behind, "Bloodshot," wanting a PG-13 rating, but I was irritated to hear them say how right now, "It is R-rated," but they plan to make some cuts so that it is PG-13 and maybe later a home release will include an R-rated version. Okay then, so if I want the, "Real," version of the movie I should just wait for it to come out on Blu-Ray/DVD, then, is what that sounds like to me.

Seriously, if the authentic version of your movie is not the one you are putting in theaters why should I see it? There are Directors who have fought against companies that take their movies (another movie everyone should see is, "Cleanflix," as it is an amazing documentary) and edit them because they feel it violates their artistic vision, and you've just outright told me the original conception of the movie is sitting there, rated R, but you're going to tweak it so that you can get get more butts in the seats? I am someone who greatly enjoys director cuts of movies because we can see the what the creators fully intended, and I have even been a little sympathetic to Zack Snyder and how often he rambles on about all the great ideas he had for his, "Justice League," movies he never got to make even though at this point its just annoying to hear him go every few months, "Oh, and if they had let me I would've done this too!" I also know movies are sometimes edited in order to be able to be made and make it to theaters/the home video market/streaming. If you're going to tell me before your movie is even out however, "Just wait until we release the real version," you have irritated me.
Posted by David Charles Bitterbaum at 10:05 PM