So, is This Comic Cancelled, a Mini-Series, or Morphing Into an Event? 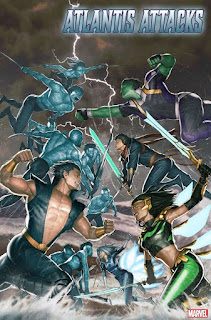 I have really liked multiple versions of the comic, "Agents of Atlas." The Jeff Parker series, the stuff being done Greg Pak currently (there was a mini-series for, "War of the Realms," and that led into the series coming out now), it is all good stuff. Well, apparently the current, "Agents of Atlas," comic I could have sworn was an ongoing title was solicited recently as just being a mini-series that is going to go for five issues. That is a bummer, but the good news is the series is actually kinda-sorta continuing with the five-issue mini-event, "Atlantis Attacks," where the Agents of Atlas fight Namor (because he's always causing a hubbub). This event will be written by Greg Pak and drawn by Ario Anindito, the current creative team on, "Agents of Atlas," so this seems to basically be, "Agents of Atlas," #6 in everything but name.

All of this leads me to wonder if, "Agents of Atlas," was cancelled, actually was supposed to always be a mini-series, or what the deal is that has it morphing into an event. The whole thing is as confusing as how in the 1990's instead of making an ongoing, "Venom," comic Marvel just released mini-series after mini-series that kept a kind of over-arching plot going. I'm not upset about this at all, as it means we keep getting more Agents of Atlas in our comics, just now a different name as some kind of event and with Namor also popping-by (and he's fun when written well). I'm quite pleased to get more Agents of Atlas, I just wish Marvel would have the book be an ongoing one as opposed to made-up of a jumble of mini-series, if for no reason other than it makes stuff a lot less confusing.
Posted by David Charles Bitterbaum at 3:38 PM