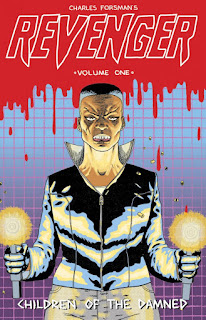 I read and reviewed the incredibly depressing, "The End of the Fucking World," by Charles Forsman some time ago. A story about a young boy and girl who run away from home whilst the boy debates if he is a secretly a sociopath or actually a decent person, it was really good, quiet, and--as I said--sad. If, "TEOTFW," were a movie it would be one of those minimalist independent flicks that pop-up at a festival like, "Sundance," and makes some waves. I liked it enough I reached out to Forsman's indie-comic company, "Oily Comics," to compliment it and ask about getting on a press-list for updates. I never heard back, but I didn't take it personally as I imagine Forsmans is a busy guy. After all, he also now has been making a comic called, "Revenger," that other than being both written and drawn by him (as with, "TEOTFW,") couldn't be more different. If, "Revenger," were a movie it would be one of those 1980's action-flicks I love so much. It is brutal, violent, full of action, and oh-so-delightfully twisted (Hell, if I may spoil it, the bad guy turns out to be Russian cyborg)! I'm not the only one to get this kind of vibe from the comic, and boy do I love it. Others love it too, as in the process of my writing this article I see Comics Bulletin interviewed Forsman about the comic as well!

We never learn the name of the Revenger, and only learn a bit about her past (apparently she had a young son who was murdered and she now goes wherever she is needed via getting phone calls from desperate people). She clearly is not someone to be trifled with however, as when a young boy's girlfriend is kidnapped and forced into sex-work at the hotel of a big-time mobster, she has little hesitation about taking on anything that gets in her way. Over the five issues contained within this trade paperback the Revenger has her action illustrated expertly by Forsman who draws everything almost in a step-by-step motion when the fighting starts, making it look all the more rough and full of pain. 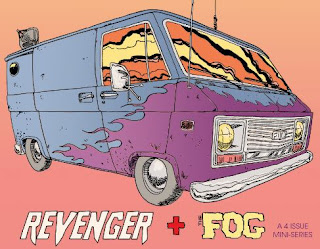 While, "The End of the Fucking World," was the kind of comic that made you think, "Revenger," is the kind of comic that is so over-the-top and wild that while it maybe isn't super-deep, it is super-fun. Forsman has been making a follow-up comics that can be found on the, "Revenger," website featuring the Revenger teaming up with other people known as, "The FOG,"and released a one-shot about the Revenger as well. I would highly recommend reading, "Revenger," and I know I'm going to be seeking-out the follow-up comics!
5 out of 5 stars.
Posted by David Charles Bitterbaum at 11:23 PM

Email ThisBlogThis!Share to TwitterShare to FacebookShare to Pinterest
Labels: Charles Forsman, comics, rant-reviews, Revenger, Revenger and the FOG, The End of The Fucking World