A Mixture of Quality

"Saturday Night Live," has often given us some of its strongest material when the political soil is ripe--e.g. a Presidential Election is arguably as fertile comedy-ground as you can get. Add an odious excuse for a nominee like Donald Trump and hilarity should ensue. That makes it all the more surprising how it took till towards the end of last season and finally during the first two episodes of this season for SNL to feel like it is taking advantage of laying upon the comedic farmland the pile of manure that is Donald Trump (and now you see what I did with that metaphor).

Perhaps because he had been a, "Friend of the show," there was hesitance to go for the throat with Trump, as the show even let him host after announcing his Presidency (and having already made horrible statements) in what was one of the biggest debacles I have ever witnessed SNL allow to take place. Thank God that ginger-handling of the topic of Trump has passed as it has become more and more obvious he is not only a horrific Presidential candidate, but an awful human being in general. During last Saturday's opening monologue when host Lin-Manuel Miranda started to state how Trump was a, "Piece of Sh..." before quickly cutting himself off so as to avoid saying a no-no word on network T.V. I cheered to see SNL has stopped its, "Let's make fun of both candidates equally," shtick and admitted that yes, Trump sucks. I mean, from Alec Baldwin's debut as Trump two weeks ago that has been pretty clear. 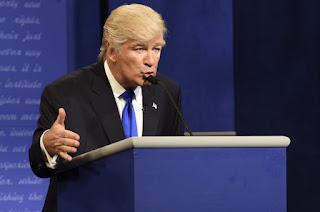 Ah yes, good ol' Alec Baldwin. Whereas Taran Killam (I miss him on the show) and Darrell Hammond gave us a Trump that was more of an attempt to mimic than mock, Alec Baldwin's surprise guest-casting as Donald Trump (for the foreseeable future at least) is a piece of parody-art. His Trump takes everything about the man and turns it up to an 11 of exaggeration. The scrunching of his face, weird pronunciation of words, general bad attitude, it is amazing. I don't know how Alec Baldwin does it but he must dig deep to create such a hideous masterpiece of hyperbolic skill. Plus, considering how Baldwin and Steve Martin often trade-off as being the people who have hosted SNL the most, Baldwin is without a doubt incredibly comfortable on the show and probably knows Executive Producer Lorne Michaels better than some of the cast. Plus, the fact the show got away with saying, "Grab them by the pussy," in last Saturday's opening was fantastic.

I'd be remiss if I didn't also mention how Kate McKinnon's has consistently delivered comedy with her hilarious portrayal of Hillary Clinton as someone obsessed with becoming President to the point she is eerily intense and kind of scary. Just two episodes in this season and I'm really missing Jay Pharoah and his Obama impression, but with McKinnon's Clinton and Baldwin's Trump the pain is at least bearable. 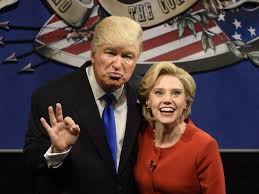 Last season of, "Saturday Night Live at times struggled to give us a show worth tuning into, especially when it came to its political humor regarding the Presidential Election. Hopefully if the first two episodes of Season 42 are any indicator things are going to be much better. Now it just remains to be seen what happens on November 8th. Hopefully we aren't all doomed/Donald Trump somehow wins.

Oh, I almost forgot to mention how considering how Baldwin is now playing Trump it is possible for Hammond to give us some Bill Clinton and have the two meet. I'm eagerly awaiting that for sure!
Posted by David Charles Bitterbaum at 2:19 PM