The More I Think About it, The More Insane "Archie VS Predator" Is 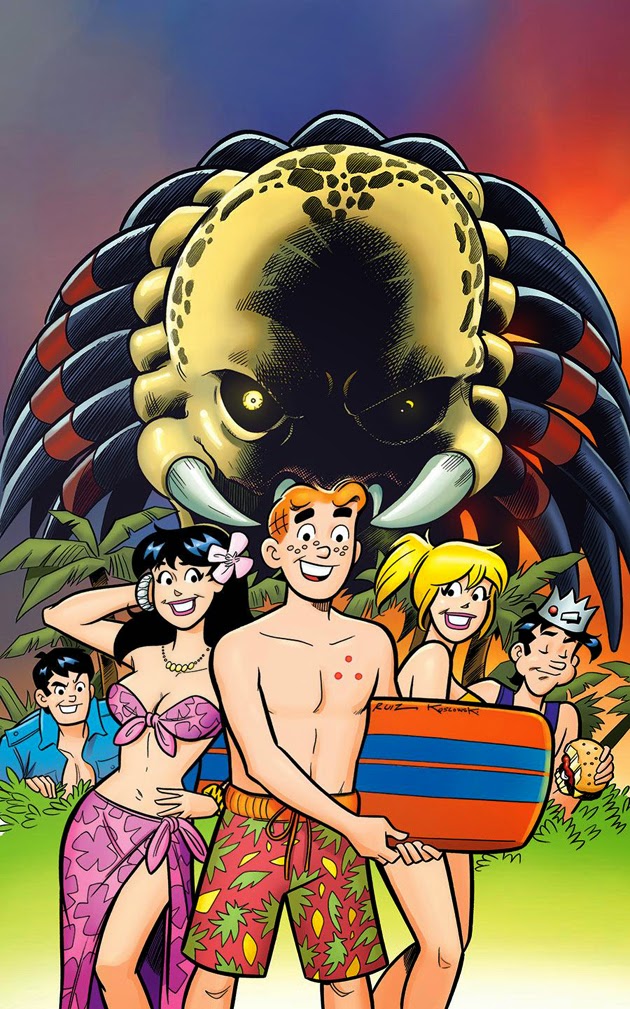 I bought the first issue of the "Archie VS Predator" comic that came out a tad ago and finally had a chance to sit down and read it multiple times. The first time I read it the interesting aspect was how it really does seem like a normal Archie comic--if with some slightly more suggestive language than the all-ages digests (Reggie refers to himself as a, "Sexual Tyrannosaur") up until the point where the Predator arrives and spies on everyone. This all leads to the only truly jarring image of this issue, where we see that Cheryl Blossom and her brother have met a really, really bloody demise at the hands of our alien guest-star. The second time I read it was just to absorb how great a job writer Alex de Campi and artist Fernando Ruiz do giving us an utterly absurd concept and making it somehow work. The third time was to make sure I hadn't hallucinated something this bizarre existing. The way the comic is presented in its more, "Classic," style of looking just makes everything feel even more messed-up. As I said, however, in this issue the Riverdale gang doesn't actually meet the Predator, they just almost encounter him while on a beach vacation and then find themselves unaware he has followed them home. By the way, I appreciate the comic keeps in mind how the Predators like to hunt in really hot places, resulting in it making sense he would encounter them in the tropics, and then follow them to a place maybe not normally suited to Predators--yeah, I'm being a stickler for movie-logic, I know.. Still, the fact this issue serves mainly as foreshadowing makes it not quite as good I would imagine the series will be when all Hell breaks loose. 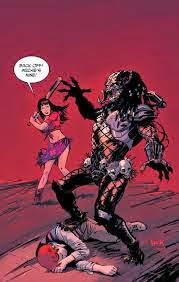 I've read some interpretations of the comic that the Predator may in fact not be hunting, but is instead romantically interested in Betty and/or Veronica--almost being like Archie in his inability to decide whom he loves most (I say he should pick Betty, it'll always be Betty). It would be funny to see a comic where it really is Archie versus the Predator, going man-against-alien for the love of his ladies. Whatever the case of why the Predator has come to Riverdale, I am excited to see what the next three issues in this mini-series hold. Now it just has to continue expertly walking the tightrope between cleverly silly, and just plain weird.
4 out of 5 stars.
Posted by David Charles Bitterbaum at 5:15 PM