Television Tuesday: "Married At First Sight" is a Piece of Trashy Voyeurism and a Genius Sociology Study--All At the Same Time!

Oh, This is just too Good.

There was a show that had a season on the FYI network called, "Married at First Sight." I didn't see it because I didn't realize there even was an FYI network. However, the more-known station A&E picked-up the rights and when I was watching my usual trashy reality television on TLC I saw an ad for this new second season and said, "Oh man, I gotta get in on that!" which brings us to where we are now.

Just what is "Married at First Sight", I imagine you are asking? Well, out of thousands of applicants some professional "match-makers" create three couples, and these couples meet, literally get married right as they are introduced, and after six weeks decide if they want to stay married or get a divorce. No, this is not a fever-dream I had or my idea of a sick-joke, this shiznit is real.

Marrying a Stranger, What could Go Wrong?
Yes, after trusting an assortment of people who study sociology, sprituality, sex, etc. with their romantic future for the rest of their lives (or at least a few months) some strangers get married, and we get to watch them either hit it off right away, struggle to get along, and/or variations between. We've just finished the sixth episode as of this evening and I'm ready to say this show is a fascinating mixture between feeling exploitative and stupid along with clever and ingenious.

It's funny there are people who say marriage equality threatens the sanctity of marriage and meanwhile straight folk can throw caution to the wind and marry a stranger so as to allow us television watchers to get our jollies. Really though, it is fascinating to examine the question of if giving some, "match-makers," the chance to use their know-how to find you love is reliable. Imagine if instead of putting all that effort into dating you could just trust some smart people, or a computer, to tell you your perfect mate--I mean, besides how sites like OKCupid use math to tell you who might be a good match, I'm talking something that says it with definitive assurance as it escorts you down the aisle to the stranger you will boinking at the end of the night (okay, not all the couples on the show have even had sex yet, but yeah).

The "Cast".
The most helpful factor in this show being enjoyable is that the couples this season are interesting. We have Jaclyn and Ryan who at first weren't actually getting along but as of this sixth episode seem to quite possibly be falling in love. There is Jessica and Ryan who had sex as of the first night of their marriage, but find that fiery passion they share can spill into some intense arguments. Then, it gets really interesting.

The most bizarre couple has to be Sean and Davina. At first he seemed like a quiet and nice guy, and she appeared to be a sweet and lonely lady. As time has gone on though the happy wrapping paper has been removed to reveal a, "present," of a conflict-avoiding and passive-aggressive husband, and a wife who talks about compromise but treats the slightest questioning of her methods or hesitation at her ideas as grounds to get enraged. I mean, it is possible that clever-editing is making them look more questionable as people than they are, but you can only artificially create so much nastiness without some real problems existing too.

Davina and Sean make for good television because their relationship has gone from happy to scary at lighting-speed. He's like that attractive and mellow guy who acts like everything is fine before stabbing you in your sleep, and she's like that hot and seemingly-sweet woman who eventually reveals herself to be batshit crazy and stabs you during a screaming-match--either way you have the "pro" of getting to grope someone sexy, and the "con" that you get stabbed. 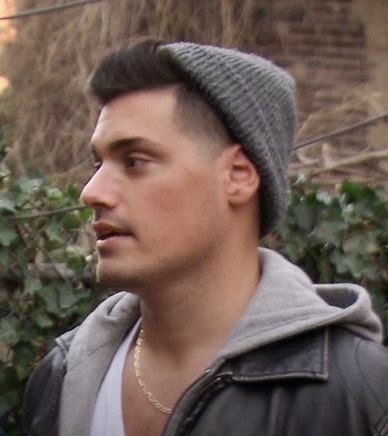 Yes, "Married at First Sight" allows us viewers to leer into the lives of some people who agree to a bizarre experiment, but does have some social value. It gives us the chance to watch folk navigate the complications of relationships, from moving-in together to solving arguments with there just also being the "hook" that they are utter strangers who are newly married. So okay, it is tacky, a bit gross in how it trivializes the concept of marriage as the expression of love between two people, and makes me feel a little dirty watching it, but I just can't help but love a show with a concept this utterly insane. This has that little bit of redeeming features that make "Married at First Sight" more educational than, say, "Honey Boo Boo," ever was.

You can tune in to "Married at First Sight" on Tuesdays at 9PM Eastern Time, 8PM Central, on either FYI or A&E, and you ought to because things are only going to get more interesting as the couples fall deeper into love, or aggravation.
4.5 out of 5 stars for the season so far.