I Dropped a Lot of Comics Part Two: DC and Image

In an earlier post I discussed how to save money I stopped reading/"dropped" a variety of comic titles. Let's examine what from DC and Image either made the cut, got eliminated, or I forgot to mention.

I'm keeping "Batman" and "Aquaman" with little hesitation as I enjoy both a lot, but all the "Justice League" books I've been reading ("Justice League", "Justice League of America", and "Justice League Dark") are "on notice" as it were, meaning I'll finish this "Trinity War" cross-over they are going through, but when all the "Forever Evil" business starts they could find one or all of them cut from my pull-list.  "Superman Unchained" is a tentative "keep" because I do like Scott Snyder's writing and will give him a chance on a Superman book, even though historically I don't really enjoy Superman's solo stories.

"Injustice: Gods Among Us" is an interesting comic that ties in nicely with the game, so its a keeper. "Green Arrow" has amazing art and (good writing by Jeff Lemire) so it is safe and I'll always have a soft spot for John Constantine so his book remains on my pull-list even if it isn't the "real" John we grew to love during his long time on the Vertigo imprint. Speaking of Vertigo, it is sort-of DC so its worth mentioning I am going to keep reading "The Wake" and the new series "Trillium" because again, Scott Snyder and Jeff Lemire make good comics--and seem to be behind most of the DC-related books I'm still reading.
Books that are okay but not that impressive to me are gone, so bye bye, "The Movement," and "Green Team", plus a terrible book such as "Stormwatch" is unquestionably cut. Also, "Batman/Superman" has had two issues worth of time to prove it is anything more than pretty art by Jae Lee and it has not done so, therefore it is cut. Also, "Batman: Black and White" may turn out to be a great mini-series as the past ones were, but I just cant afford an anthology that may have more bad than good.

Weirdly, I'm keeping "Suicide Squad" for now, as I started it with the Ales Kot issues that were really good and hope when Matt Kindt takes over on issue #25 the interestingly weird tone of the comic continues. Oh, and I'll try the first issue of "Superman/Wonder Woman". Last of all for the DC books, I'm going to read the "Forever Evil" mini-series as long as it isn't bad and look into the tie-ins--e.g. I'm trying some of those villain one-shots and such.

I read some Image books so it is worth talking about the imprint. Even though I dropped "Sex Criminals" before the first issue even came out (if it gets good word of mouth I'll look into it) I am reading another book with "Sex" in the title, namely Joe Casey's comic that is simply called that, "Sex". Also, because I like Joe Casey's writing as much as I do, I think I'll keep up with "The Bounce" for at least a few more issues, as it is starting to make more sense than the illegible first issue. Catalyst Comix is written by Casey too, so it of course is a lock.

Other titles I want to keep up with for at least a bit by Image include the new Greg Rucka series "Lazarus", the lushly illustrated by Juan Jose Ryp series "Clone", and  Jonathan Hickman's "East of West". Plus "Satellite Sam" is proving to be a dense, but intriguing read. 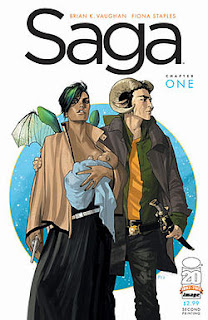 I love me some "Elephantmen" so that title has no need to worry. Also, as much as I've enjoyed the long-running "Elephantmen" I might have to say I love Brian K. Vaughn and Fiona Staples' "Saga" even more, so you know I'm keeping that! Also, even though Kot isn't on "Suicide Squad" any longer his new comic "Zero" looks enticing.

It would seem that I'm cutting a fair amount of DC (or have a lot "on notice") and very little of Image. That's worth discussing in my Part 4 overview of reflecting on what my, "cuts and keeps" mean. Before that however, look out for Part 3: The Other Publishers, which will be posted before long also.
Posted by David Charles Bitterbaum at 7:00 AM