I'm at a Wedding this Weekend and it has Me Thinking about Super-Hero Marriages.

A cousin of mine is getting married this weekend (later today, actually!) and it has me thinking about super-hero marriages and relationships. Often they don't end well.
A fair amount of times it seems the girlfriends of male super-heroes don't have the best time, often being killed (or "fridged" as the term goes thanks to the above comic image) by a villain to make the male super-hero angry. Super-hero marriages seem to work out a bit better with at least some relatively happy couplings, but even those have had issues.
For every Reed Richards and Sue Storm couple that is well-functioning and even has kids, you have two sad occurrences such as Matt Murdock/Daredevil with his former-wife being driven insane, or Peter Parker/Spider-Man with his marriage to Mary Jane finding itself undone via a deal with the devil (yes, it was a very stupid story). You have Buddy Baker who generally seems to have a good thing going with his wife, but then there is Clark Kent/Superman having his marriage basically written out of continuity by DC when they re-booted their universe, or Storm and T'Challa/The Black Panther having their marriage annulled.

I know marriage can be hard, but why does it seem so often super-hero relationships or marriages seem to be impossible and end either A. horribly or B. through a silly continuity-alteration that has the flimsiest of stories to explain it(I'm looking at you, Peter Parker and Clark Kent)?

Perhaps it is because a lot of comic readers are young folk--especially young males--and having super-heroes be older and married with children makes them more difficult to relate to than a young and single crime-fighter. It could be writers find it is easier to tell stories about dating and romance with various characters as opposed to coming up with perhaps less-exciting tales of happy matrimony, after all, stories thrive on conflict and when a hero is content in their relationship we are lacking a little in drama. I don't know why super-hero marriages and general relationships often face troubles, it just seems they just do.

All of this goes without saying we are just talking so far about heterosexual relationships if for no other reason than that there are so few gay characters, and even less in relationships. True, the more independent comics have had gay characters with relationships and marriages for some time, but one of first "mainstream" super-hero weddings just occurred within the last few years when Northstar married his boyfriend Kyle in the pages of "Astonishing X-Men". There are other gay characters who are dating, but only time will tell if their loved ones will also be "fridged" in an attempt to give said characters motivation to fight crime or save the world. You may think I'm joking, but it is kind of already happening! In the comic "Earth 2" we find Alan Scott (this version of the long-lived character is gay) proposing to his boyfriend before Scott nearly dies in a train crash and his boyfriend does sadly pass--thereby inspiring Allen to become a Green Lantern (it seems Green Lanterns have a really bad track-record when it comes to romance).

Both straight and gay super-heroes are finding their loved ones are not safe from the pens of writers who need to introduce conflict to stories, and it is kind of sad, because even if many marriages in the real world do end tragically due to accidents or divorce, there are still a good amount that last a long time and are full of love and happiness. I myself would like to see more Reed Richard and Sue Storm-styled couples in comics, where they may face conflicts with their marriage from both within themselves and outside forces, but in the end their love helps them conquer challenges. It would result in some fresh and innovative stories and make these characters more appealing to readers who have a loved one they are dating or married to.

I guess we will see if as time goes on our heroes are allowed to mature at least a little bit and have relationships or marriages that are joyous instead tragic. I would like that, because if anyone deserves to finally have some happiness and love in their lives it's Bruce Wayne/Batman... 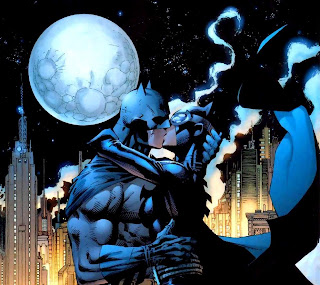 Someday you'll settle down, Bruce, someday.
Posted by David Charles Bitterbaum at 10:54 AM