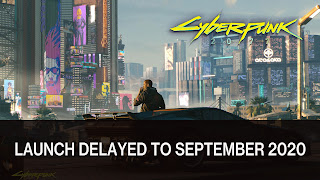 One game I've allowed myself to be cautiously optimistic about is, "Cyberpunk 2077." A big and sprawling RPG set in the future and based on the 1980's tabletop game, "Cyberpunk 2020," it is being developed by CD Projekt Red (of, "The Witcher," game fame). It has been in development for years and was tentatively due to launch in April of this year. Well, it has been delayed until September. There have been arguments this was bound to happen with such an ambitious undertaking of a title. Others have expressed concern if this will result in extreme, "Crunch," which will stress and exhaust employees.

I'm disappointed but understand if more time is needed to hopefully have the game reach its full potential. I just hope fans are patient and CD Projekt Red keeps its employee's well-being in mind whilst finishing the game. Now I guess I just have more time to try and catch-up on the massive backlog of games I plan to play sometime when I have a free moment.
Posted by David Charles Bitterbaum at 6:10 PM