"Churchill: A Graphic Biography," Provides A Stellar Overview of a Fascinating Life 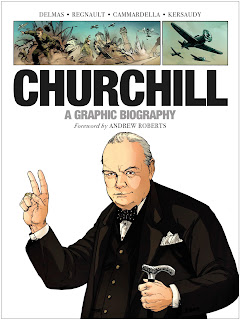 I'm on the mailing list for the publisher Dead Reckoning, which is the graphic-novel focused imprint of the Naval Institute Press (a part of the U.S. Naval Institute, an independent, non-partisan, non-profit, professional military membership association). The NIP prints books that explore naval and military history in both fictional and nonfiction methods. I was a huge fan of, "Trench Dogs," which explored World War I through anthropomorphized characters and was excited to get an advance review copy (it's due to be released April 15th, 2020) of a more nonfiction work, a graphic biography of Churchill.

Well-known historical figures who did great things as Churchill did can be tricky to write a biography about because people have lots of preconceived notions. Some may be prone to deification as if Churchill could do no wrong, and those who would be all too eager to point-out only his failings. The foreword to the book by popular historian and biographer Andrew Roberts acknowledges this risk, as he lays-out in his opinion that this graphic biography does a stellar job refusing to sell Churchill short, but also willingly acknowledging the man's imperfections. He was loud, he was brash, prone to impulse, but he also was brilliant and integral in the Allies victory during World War II.

"Churchill: A Graphic Biography," has a solid introduction that points-out this biography tries to be thorough, but with someone such as Churchill there was so much that went on in his entire life that this book is focused on more of notable points in his development as a young man and then most impactful decisions as a military officer and politician. The book's writer, Vincent Delmas (translated by Ivanka Hahnenberger), does an excellent job examining Churchill, starting with him as a young boy up through the conclusion of the war against Germany in WWII. Teenaged and early-20's Churchill is brave but almost foolhardy in how recklessly he rides a steed into battle.

As Churchill grows, he develops more skills in strategy and surrounds himself with the best advisors and tacticians during times he really needs their assistance. The ups and downs of his life are earnestly portrayed, with even a joyful moment such as the victory over Germany in WWII having a somber note as Churchill reflects that the Nazis may have been defeated but a new Iron Curtain falls across the World (Stalin and the Soviet Union). Churchill actually lived to 1965, but the book ends with the Japanese theatre of war still an ongoing concern and a good 20 years of his left uncovered. It is understandable as much time should be (and is) focused on the earlier parts of WWII where the UK was often under threat of German attack/actively being bombed, but it seems a little odd to suddenly just stop the biography when Churchill had a good deal of life left. It's the author's choice, however, and everything before the somewhat abrupt ending reads great. 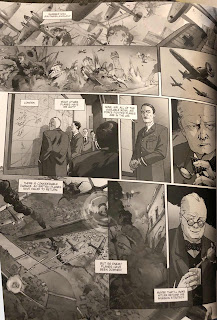 The art by Christophe Regnault works superbly with the story. There are a lot of text-heavy moments as Churchill's life is examined, but at points in the book, Regnault gets to really cut loose with some stellar layouts, such as key battles of WWII. There are humorous moments drawn fantastically as well, such as a towel-clad Churchill fresh out of the tub joking with America's President Franklin Roosevelt about how, "Britan has nothing to hide." As this is a graphic biography it is key that the illustrated elements are strong, and Regnault is talented at making sure the book is as eye-catching as it is informative.

"Churchill: A Graphic Biography," is fantastic. It's informative while being engaging with the writing and artwork working in perfect unison. I would recommend giving it a read for sure if you want to learn about Winston Churchill in a unique manner compared to the all-prose biographies of him. I look forward to the book's release in April!
5 out of 5 stars.
Posted by David Charles Bitterbaum at 1:17 PM