Cankor is a Wild and Weird Ride of a Comic 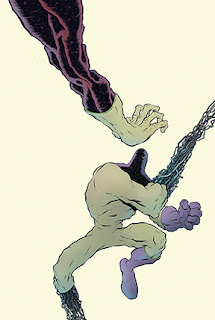 Matthew Allison's graphic novel, "Cankor," collects his self-published comics of the same name and will be published by Adhouse books in late March or early April of 2020 (so, this year). The thing that immediately caught my eye about, "Cankor," and resulted in me reaching out to ask for an advance review copy was how Allison's illustrating style reminded me of Michel Fiffe (in a good way) with the surreal storytelling of Michael Deforge (also in a good way), while wholly being its own thing. It makes sense solicitations for the comic have pointed-out how this is reminiscent of Derforge (it mentions Quitely as well, but I really see more of a Fiffe-style) as well. Again though, this is its own odd thing. As for that thing is/what is, "Cankor," about? Well...um, it's complicated.

"Cankor," is a comic about various realities within the comic's World, while also at times making it apparent it is aware it is a comic (a little meta here and there) and riffing on other comics and the very question of reality itself--such as when Allison has some, "Author's notes," that themselves seem to be a mix of reality and fiction (I believe he got in a fight at a concert once, I'm not sure I believe there was ever going to be a, "Batman: Year Five," comic). "Cankor," at times follows extra-dimensional beings made up of both flesh and machinery duking it out violently, but this only when it isn't exploring otherworldly landscapes with its characters at well or dipping-back into a reality (of sorts) where people seem to be living in our regular world, except its black-and-white and people lack any visible eyes for some reason--I told you this was some weird stuff. 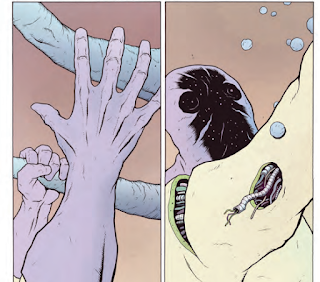 Allison does a lovely job alternating between Worlds and providing faux-supplementary material ranging from calling himself out for swiping other's work to criticizing comic-book reviewers (my feelings weren't hurt, I hope I'm not as snobby as his fake reviewer). His drawing-style shifts as needed in clever ways, with the, "Real," World not just being black-and-white but also more sketchy in style than his clean and complex lines of, "Blood, wires, and suffering."

The comic is at once multiple plots all going on at once loosely related or outright unrelated to each other while at the same time arguably being one big mega-plot where it all ties together in a strange way of mixing straightforward sci-fi storytelling with meta-fiction and general zaniness. It is utterly bonkers, and that is probably why I loved it. I would be sure to request your comic shop/bookstore/library/legal weed store orders a copy so that you too can enjoy this fantastically bizarre work.
5 out of 5 stars.
Posted by David Charles Bitterbaum at 7:17 PM