"Brother: A Story of Autism," Is a Great Story and Teaching Tool 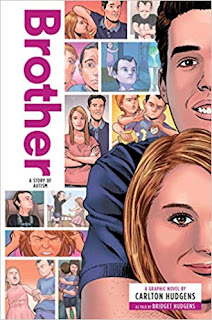 I often keep updated on comic and graphic novel releases by reading-through, "Previews," magazine and its list of new releases. One thing that recently caught my eye was a just-released book from the new publisher Zuiker Press. It is a publisher focused on helping newer younger authors tell their stories through this, "Issues based," publishing house. They have nonfiction titles focused on an assortment of subjects, with, "Brother: A Story of Autism," sounding very interesting to me, as I am of course quite familiar with the subject of ASD. Written together by Carlton Hudgen and Bridget Hudgens, it discusses from Bridget's point of view life growing-up as the younger sibling to an older brother with ASD.

The book follows what life was like for Bridget and her family as they saw doctors as Carlton was growing and were informed about his diagnosis along with realizing how ASD did not define him as a person. "Brother: A Story of Autism," is sure to make it clear that ASD is not some terrible thing that afflicts families, it is an aspect of the sibling/child they love and this book makes clear to discuss all the ways Carlton showed he was smart, caring, and a dedicated brother as he grew and continues to be a happy and functional adult despite some stereotypes of ASD being that people diagnosed with it cannot have fulfilling lives.

Bridget and Carlton are sure to talk about in the book how regardless of Carlton having ASD they had regular sibling moments of at times fighting, other times being close and happy. "Brother: A Story of Autism," also goes in-depth on discussing how at times life was hard or happy independent of Carlton's ASD. Their mother and father go through a difficult divorce shortly after the birth of their youngest sibling, their mother meets a nice man who loves her (and who also is supportive of all the kids) and they get married, Bridget goes to college, and so forth. The book is sure to point out that having a family member with ASD is a big part of life, but not the only thing in our lives.

The penciling by Nam Kim works wonderfully in the book, being drawn as realistically and grounded at some points, but then when portraying the imaginations of Bridget or Carlton changing in clever ways to help illustrate how Bridget or Carlton may have felt at a certain time. For example, when Carlton is seeing all the doctors testing him for ASD they are drawn as scary space-aliens as he was quite intimidated, and another moment where Carlton helps shield a snail from the heavy rain is illustrated with the snail giving him a thankful smile. These little artistic flourishes help had an extra enjoyable element to the story and compliment the prose superbly. None other than well-known comic creator Gary Leach actually provides the inks, and Fahriza Kamaputra's colors are stellar as well.


"Brother: A Story of Autism," was created in a way to be easily used in the classroom or given to parents of children who may have recently been diagnosed with ASD. This is because it smartly includes sections covering parent take-aways from the book about Autism and a section for how the book can be used in an educational setting. "Brother: A Story of Autism," is written to be younger-reader friendly as well so anyone from students to adults can enjoy it. Carlton and Bridget are now in their 20's and both are excelling in life. I loved their book, "Brother: A Story of Autism," and thank Zuiker Press for providing me with a copy for the purpose of review when I contacted them about my interest in the book. Whether you know a lot about ASD or simply want to learn more, this is a fantastic read.
5 out of 5 stars.
Posted by David Charles Bitterbaum at 1:05 PM