I have had a complicated relationship with the work of Ed Benes. Back in the earlier days of the blog there was a day when I was feeling extra salty and cranky so I was rude and called him a hack. Then years later I realized I liked a lot of his work and made a public apology. Some time later I saw he was doing a new Kickstarter for a comic he was creating titled, "Nina and Ariel," which I told folk about and backed myself. Well, the comic arrived in the mail the other day (along with some other rewards I qualified for such as some trading-cards and a bookmark) and I thought I ought to review it.

"Nina and Ariel," reminds me a bit of a comic from the publisher Boundless--and I mean that as a compliment. While some folk rail against Boundless as being pure cheesecake I find the comics have a nice mixture of high-concepts, action-scenes, well-paced plot, and sexy artwork. Within, "Nina and Ariel," Benes has all of that. The comic discusses a depressing future where Earth has been ruined and all the rich folk fled, leaving behind everyone else to fend for survival on the wreck of a planet (high concept. With this we witness our heroines dealing with all sorts of unsavory characters in violent ways (good action) before meeting one another and realizing they need to team-up by the issue's end (a well-paced plot that doesn't make us wait forever to have the heroines meet). Also, within the issue we get a lot of nudity that doesn't come-off as excessive or grotesque, but is reasonably erotic and enjoyable (sexy artwork). 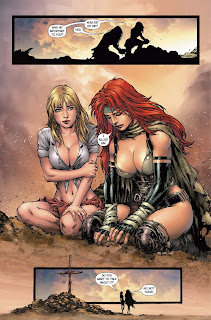 Ed Benes is both the writer and artist for the comic, with it clear he put a lot of care into making this book as it is gorgeously illustrated. Every page screams with detail whether it is simply characters talking or a complicated fight-segment loaded with punching and kicking. It makes sense the book would look good of course, as Benes has been a comic-artist for some time. The plot is solid too, not necessarily wowing me as much as the art but still making perfect sense with some cool ideas thrown in and giving us an excuse to move Nina and/or Ariel to the next scene where they can either fight or enter a state of undress.

The first issue of, "Nina and Ariel," is a great read for fans of Ed Benes or anyone who enjoys a good action-packed sci-fi yarn with a solid dash of cheesecake art. I'm glad to have backed it on Kickstarter and will for sure want to pick-up any future issues!
4 out of 5 stars.
Posted by David Charles Bitterbaum at 3:03 PM