"The Green Lantern," #1 by Grant Morrison and Liam Sharp is A Solid Start 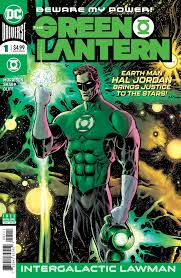 I am a big fan of Grant Morrison, having loved a lot of his works (and admittedly hated a handful too). His latest work is writing, "The Green Lantern," ongoing comic with artist Liam Sharp that I believe takes place in the current DC Universe/continuity but seems in other ways somewhat removed and almost had me wondering if it was set in the past if not for some more-recent references (I'm not alone in this either, as this cool annotation of the comic talks about). This issue follows some Green Lanterns investigating a crime that it turns out released some kind of horrific and dangerous force that results in Hal Jordan being called-upon by the Guardians (who run the Green Lantern Corps) to investigate what could be going on. It all may sound straightforward, but Morrison works in all kinds of weirdness from a virus that serves as a member of the Corps to a, "Fleshmen," alien with a hive mind plus all kinds of weird little callbacks to past comics that hardcore readers as well as those only a little familiar with the assorted Lanterns (such as myself) can both enjoy regardless of how extensive or limited their knowledge is.

The first issue of, "The Green Lantern," with Morrison at scripting-helm is well-written and fun if not immediately awe-inspiring, but Liam Sharp's artwork picks-up any slack in what Morrison presents us. Sharp's illustrations of alien worlds and creatures are lush, detailed in their surreal abstract nature, and otherwise had me staring at pages long after I'd read any plot-points or dialogue just to absorb the mixture of his beautiful and hideous drawings (some aliens are incredibly ugly in an impressive way). He assembles the panels on the pages in a way that the story flows perfectly and his art-style contributes to the retro-futuristic vibe I got from the comic.
This first issue of "The Green Lantern," is a mixture of solid writing from Grant Morrison and superb artwork from Liam Sharp. It contains plenty of action, sets up a mystery, and otherwise is a solid start to what will hopefully be a hum-dinger of a run. I eagerly look forward to more.
4 out of 5 stars.
Posted by David Charles Bitterbaum at 6:15 PM