I Tried and Quite Enjoyed the Battle Royale mode of, "Fortnite," Recently! 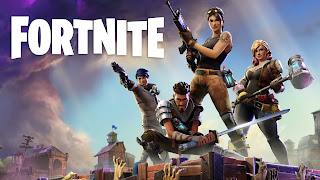 People love battle royale games--e.g. where folk land on an island full of players and have to survive while the map shrinks and be the last individual/team standing. It started coming to popularity with, "Player Unknown's Battlegrounds," and then a game that launched with a different focus known as, "Fortnite," introduced its own Battle Royale mode mainly as a fun lark and it blew-up in so much popularity people now barely play the game it initially launched as and everyone enjoys the Battle Royale. I've heard so much about it that I did what you are usually told not to do--I did an activity because the internet said it was fun. Unlike eating tide pods however playing, "Fornite," on my Playstation 4  didn't make me sick, but instead was actually a great time!

How does a match of Battle Royale work in, "Fortnite?" Well, you jump out of a flying bus that goes over the island, deploy your glider to land safely, and proceed to gather weapons, shields, health kits, and resources so you can build walls and stairs to keep yourself extra protected. In the meantime the other 99 players in the match do this too and slowly the map shrinks as more folk are wiped out by everyone else (or in some cases accidentally running of a cliff and falling to their death). It is a simple idea that works wonderfully in execution, as everyone either tries to gun each other down, hide as long as possible and let the other players whittle each other down, or some mixture of strategies. Plus, there is a mode where you can have a small team and that can result in some wacky matches also. 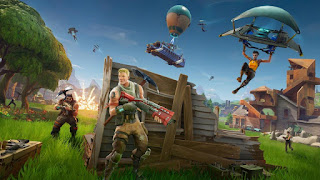 As readers of this blog no doubt know, I have an infant son named Clarkson. Having a baby makes it hard to be able to dedicate a big block of time to a video-game. "Fortnite," and its Battle Royale matches tend to be nice and quick, however, so that's perfect for me. Another thing that is wonderful would be how the game is utterly free. I don't even have Playstation Plus but I can still enjoy fighting against other players and the only thing that costs money would be cosmetic upgrades to make my character look different in wild outfits--people can never pay-to-win and all the matches start with everybody having nothing besides their pickaxe for harvesting resources and scavenging for everything else.

"Fortnite," and its Battle Royale mode is fun, fast, and free--three things I seek-out nowadays when it comes to my video-games. Having played it I can now easily see why the game has become such a phenomenon--it's a rollicking good time, after all! I'd encourage anyone who enjoys fun games to try it out as all you need is a device capable of playing it (PS4, Xbox One, PC, or even mobile phones now) and an internet connection. Give it a shot and you'll most likely love it!
Posted by David Charles Bitterbaum at 5:45 PM