Intro
I've enjoyed reading comics written by Alex de Campi, often loving the dark humor in much of her work. I have a big soft-spot for the wild mini-series that was, "Archie VS. Predator," and as a big fan of wacky horror and science-fiction films loved her, "Grindhouse," comics. I enjoyed meeting and talking with her at the 2015 Project Comic-Con (discussed here and here) as she  was both hilarious and insightful--things that make for a good interview! Therefore, I asked her recently if she would be willing to do an interview via email about her past work and upcoming comic, "Mayday." She was awesome and said yes! Below is the interview. 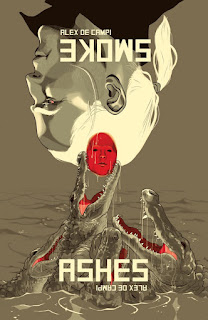 Hello Alex! For those not familiar with you, would you mind introducing yourself?

Hey! My name's Alex. I make stuff. I write comics, and am working on two novels (a serious one and a trashy one), and I also direct music videos and commercials. You probably know me from ARCHIE vs PREDATOR or GRINDHOUSE, or maybe my other Image series, NO MERCY. Or maybe the videos I've directed for Amanda Palmer or the Puppini Sisters or Joan as Police Woman.

How did you enter into the field of comics? The first time I personally heard about you it was in reference to your political thriller, "Smoke," and its follow-up, "Ashes," but I'm always a fan of hearing the nitty-gritty of how a person started-up in the comic industry.
When I was a kid, my mom figured out real fast that she could shut me up for a whole hour by letting me pick a comic off the spinner rack in the drugstore. (It was always X-Men.) Then I grew up and discovered boys and rock and roll, and fell out of comics for a while until a friend was moving out of his barracks in London. That friend handed me a HUGE box of 2000AD and the late glory-years Vertigo books (Preacher; Ellis' Hellblazer; Sandman). I got addicted again. Then I fell in with this disreputable crowd who were all trying to write and/or draw comics and they said I should, too. So I did.
Oftentimes when I think of a comic-maker I'll be able to associate them with a specific genre, tone, etc. That doesn't really happen with you. You've done everything from a thriller in the form of, "Smoke," and, "Ashes," to kid-friendly comics with, "My Little Pony," what I would call an outreach-trip-gone-terribly-wrong yarn with, "No Mercy," some super-hero stuff about Wonder Woman, and you did many issues of the often-erotic, "Grindhouse," series that was full of science-fiction and horror. Plus, you did a comic where Archie and his friends went-up against the Predator. Describing your bibliography sounds like the work of at least three different writers--what inspires you to do such a wide-variety of comics?
I may not have a particular genre, but I do have a very specific violent, tension-filled noir tone that comes up in a lot of my work. I'm also at heart a comedian, so really wrong humour also happens. I'll tend to do a bunch of books in a similar mood -- Archie vs Predator and Grindhouse, for example -- and then go in a different direction, maybe more noir, maybe lighter. No Mercy and Mayday are both very, very tense, suspenseful stories, so now I'm looking to do something more relaxed. I'm working on a romantic comedy (...which will involve murder and explosons, because me) and a crazy shonen book. You get really involved in something, and then once you've done it, you need to do something different, you dig? It wouldn't be any fun, to just write the same sort of story all the time. Though all my books tend to end up as thrillers...

Speaking of, "Archie Vs Predator," how in the world did that come about? Also, considering how insane an idea that was how did you make it work so well?
I wish I could take credit for the concept, but it was all the Archie bullpen! I was just the Joe (or Joan) lucky enough to be offered the gig. I find it hilarious that people think of it as a hard concept to write -- I took one look at it, went "this is a teen slasher; it's Final Destination with the Predator," and off I went. The only things I kept in mind was that I had to deliver really good scares and gore (for the Predator fans, my people! get in here, fam! ::hugs::) and also great teen physical comedy and sass (for the Archie fans. Also my people! You get hugs too.) In both regards I was ably assisted by Fernando Ruiz, the book's penciller, who has the ability to make any script 400% funnier with his sharp eye for gags. Going back to the subject of, "Grindhouse," how much of a B-movie aficionado are you? I definitely get the vibe from reading, "Grindhouse," you've seen plenty of weird sci-fi and horror flicks. Do you have a favorite obscure gem?
I grew up just outside Philly and was a latchkey kid, so I spent a lot of time watching terrible old movies on Channel 29 (before it became a Fox station). And then... one of my coping mechanisms is going to see movies. It's a little harder now that I'm a single mom, but I used to haunt the NFT and the ICA in London. I'd see three films in a day, spend the whole day on the South Bank... so yeah. I've seen a lot of movies. Favourite obscure gem? Well, Lucio Fulci's a fave director for horror (see The Beyond, yum, all those Italian gooey practical FX) and see if you can dig up Fernando di Leo's Milan 9mm for a gangster flick. Oh and wanna see something crazy? Check out Sekiguchi Gen's Survive Style 5+.

There are not too many comic-writers who also letter their works but I am aware that you do so. I know so little about lettering that it isn't even funny, please explain to a clueless person like me how it works.
I open up the art in llustrator, zoom in to like 1200% and either hand-letter (like this: http://alexdecampi.tumblr.com/post/137484898259/how-to-hand-lettering-comics-in-illustrator ) or use Comicraft fonts to put dialogue and SFX on the page, and then add balloons around the dialogue. For me as a writer, it's also a chance to fine-tune (and occasionally totally rewrite) dialogue so it fits the art perfectly, and add SFX in the right places. It's hugely time-consuming, but I love doing it. 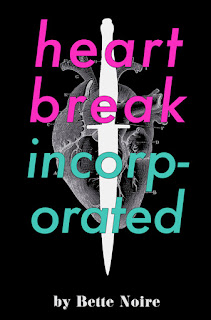 I've seen how you posted how you're working on a, "Trashy novel," called, "Heartbreak Incorporated," under the pseudonym Bette Noire, can you share what it is about?
I'm working on two novels at the moment -- a big ambitious one about the nature of identity and humanity, and of course the trashy, easy book, Heartbreak Inc. Heartbreak Incorporated is about a twentysomething gal (and would-be investigative journalist) named Evie who is this >< close to not being able to afford to live in NYC any more... until she gets a job working for a private investigator who specialises in breaking up relationships. And who might also be a murderer.

The novel you referred to a big and ambitious sounds interesting! Can you share more or is it in too early of a stage to say much?
It's still too big and raw and in progress to talk about, I'm afraid! 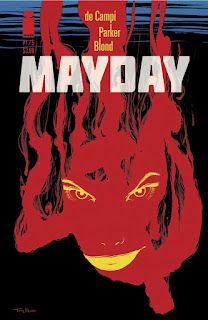 You've got an upcoming comic coming from Image titled, "Mayday," that already had me sold when upon reading the description I saw the words, "California," "Soviet operatives," "Top-Secret," "Sex," and, "Drugs." Is it possibly the drug-and-sex filled comic full of Russian spies in sunny California I've been waiting for?
Most definitely. It's a book full of shady deeds in sunny places.

Earlier you mentioned directing music videos, how is directing different from writing? I imagine there are a lot of, "Moving parts,” so-to-speak.
There's a lot of specialist technical knowledge that comes with directing. You have to be able to do about 20 things at once, and make difficult snap decisions on set -- and refocus quickly if something doesn't work or if you have a setback. Directing means you're collaborating with people on set in real-time.... not asynchronously over email or conference calls. But other than that, there's a lot of complementary knowledge involved, like shot framing, pacing and visual storytelling.
Speaking of music, what is your favorite kind of stuff to jam-out to? Do you listen to music while writing?
I listen to everything. I tend not to listen to much while I'm writing, as I like to concentrate. MAYDAY is very slated towards music though, each issue has a playlist -- some songs of which are integrated into the story. It's all about the birth of metal and punk... in 1971 Alice Cooper and Sabbath both had a couple albums out, so did the Stooges -- and meanwhile the chart songs were stuff like the Osmonds and Tony Orlando & Dawn. The change in America's sonic landscape towards harder, angrier music reflects what is happening thematically in the book. 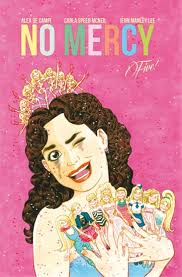 You've got a time machine, putting aside how it may horrifically mess-up history, is there a particular creator you would pluck out of the time stream to collaborate with at a certain period in their career?
Nah. Now's a pretty good time in comics, y'know? This might really be our golden age. There are still so many people I want to work with RIGHT NOW, and I'll never get to collaborate with them all.

What other projects coming up can you tell us about? If you can't talk in-depth about too much can you at least give us some juicy-hints?
Alas, I don't talk out of school about things that aren't announced yet. But I am working nonstop and I have so much coming out over the next 2 years it's kind of crazy. 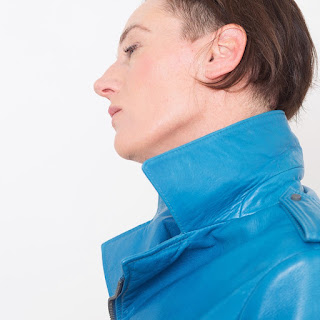 Thanks again to Alex de Campi for a great interview! You can visit her website here and you should be sure to check out, "Mayday," when it hits comic-stands early this November!
Posted by David Charles Bitterbaum at 9:49 PM