What the Ending Teaser Means at the End of "Thor: The Dark World"

Spoilers Ahead!
This is one big post of spoilers, obviously. Back in the days of the first "Thor" movie many folk found themselves confused by the little teaser (or "stinger" as some call it) after the credits. I explained what it meant and found that a variety of people found it useful. Well, lo and behold we have the new Thor movie out (which I saw last night and will have more up about later), and it too has a teaser--this time during the credits--that left a variety of people in the theater scratching their head while I exclaimed loudly with joy, much to the embarrassment of my girlfriend next to me. 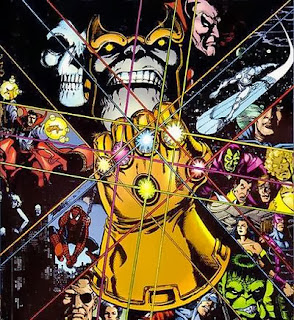 The Big Tease
What is the deal with that scene then? One thing you don't really need to know is that the "Collector" individual being talked to (played with great eccentricity by Benicio Del Toro) is a character from the comics who has appeared at various points, with his shtick of course being he likes to collect things from across the galaxy. He is handed that Aether entity and then the BIG bombshell gets dropped, it and the Tesseract/blue thing from the other movies are Infinity Gems/Stones!

The Infinity Gems/Stones, sometimes also called "Soul Stones" are 6 individual and highly powerful pieces that combine on a big glove (of sorts) to result in the Infinity Gauntlet, something that gives the wielder what could best be described as God-like omnipotence and the ability to shape the Universe however they see fit. Now, this ties in quite well with the other movies because guess who one of the scariest people to wield the Infinity Gauntlet was? Yup, Thanos, AKA the guy who appears in that teaser during the "Avengers" credits.

It is now becoming pretty clear that Marvel is slowly building toward an epic event-movie involving Thanos, the Infinity Gauntlet, and all of the universe in what I imagine will be the 3rd Avengers movie, because it seems the 2nd one is going to involve Ultron (who knows, maybe Ultron will team up with Thanos in a later flick resulting in a quite dangerous team). Just think, if the Tesseract could cause all the trouble it did in the earlier movies, and the Aether almost destroyed everything too, what would happen if those and other gems/stones were combined to form an unfathomable weapon?

Yeah, I'm definitely intrigued by all of this.

Posted by David Charles Bitterbaum at 11:34 AM