Film Friday (Despite it Being Saturday)--Thor: The Dark World & The Potential Troubles of a Marvel Cinematic Universe Made Too Big 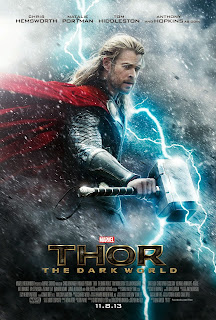 I saw "Thor: The Dark World" last night and will share a few thoughts on it in a spoiler-ific manner so as to tell you why I enjoyed certain parts and disliked others to result in an overall quite solid whole. Plus, through revealing a few elements I can discuss a worry growing within me that I used to only hear the occasional mention of, but which is now becoming quite the topic du jour. Namely, can the Marvel Cinematic Universe get so big and overly complex that it becomes as impenetrable to casual-watchers as many super-hero comics are to a non-reader?

The Danger of "Too Much"

By now if you follow comics and/or entertainment news much you have probably heard about Marvel's big deal with Netflix to produce a variety of shows that will be interconnected to the point they all lead into a "Defenders" program. This sounds exciting, but as "The Guardian" points out, couldn't this result in a bunch of shows where unless you watch every program, the resulting whole will be confusing? Arguably one of the best aspects of the "Avengers" movie was that you didn't really have to have seen any of the other Marvel features that led up to it in order to enjoy the flick. Sure, it helped to have watched "Thor" or one of the "Iron Man" movies, but if you saw those and nothing else you could easily deduce that Captain America had just recently come into the present, or that Bruce Banner/The Hulk was a genius struggling with his inner-rage (Hell, you really didn't need to see "The Incredible Hulk" at all, with it possibly making a viewer more confused due to the casting switch from the decent Edward Norton to the superb Mark Ruffalo). Will that be the case with these Netflix shows however?
I'm going to give you an example to prove a point. Okay if someone were to not be interested in Luke Cage (which is crazy, but bear with me for the sake of an example), but enjoy watching a show about Jessica Jones, would they still be able to enjoy the resulting "Defenders" program even if they just "tuned in" to some of the characters' original programs? This leads to the even bigger question of if people will be able to enjoy the upcoming Marvel movies even if they have only viewed some of them. Should someone only go to "Iron Man 3" and the upcoming "Captain America: the Winter Soldier" will they still be able to follow 2015's "Avengers: Age of Ultron"? This is especially something to consider what with the big surprise at the end of Thor being--this is your last chance to avoid spoilers--the appearance of Infinity Gems/Stones, which makes it clear how important that original stinger with Thanos at the end of the first "Avengers" movie was, as I would bet a fair amount of money we are building toward some sort of "Infinity Gauntlet" type story in an inevitable "Avengers 3", which I talked about earlier today.

A movie such as this potential "Avengers 3" could incorporate all of these current films from Marvel's "Phase 2" and anyone new introduced between the 2nd Avengers flick and the 3rd (Marvel's "Phase 3"), or maybe even work in those Netflix characters. By now I bet you see just how intricate this could all get, and the potential for what at first was quite snazzy--a connected Universe--becoming an unbearably bloated and dense. In the nightmare scenario it gets to the point your average Joe and Jane throw their arms up in exasperation before even the 2nd "Avengers" film and declare, "Forget this, I'm just going to go re-watch those Christopher Nolan "Batman" movies!  At least those are just three movies instead of eleven (seriously, as of "Avengers: Age of Ultron" there will be a total of 11 connected Marvel flicks)."
I and some other folk out there could be worrying over nothing. For all we know, Marvel may be well aware of this risk and take great pains to make sure you can still enjoy  the tent-poles of their franchise like the "Avengers"-type movies without seeing anything else. There is that current "Agents of S.H.I.E.L.D." show and that seems to have not impacted the Marvel movies that much, other than obviously tying-in with various plot threads (working in Extremis, for example, or an episode that apparently involves the aftermath of this new Thor movie, and so forth). Maybe the Netflix programs will be in the Marvel Cinematic Universe, but not overly involved with a lot of the films, linking into them in subtle ways that make complete-viewing rewarding, but not essentially to enjoying the films--just as you didn't have to see "Thor" to like "Avengers" but it was a great way to really understand Loki's reasons for how he behaved. How was "Thor: The Dark World" itself, though? As I said, mostly enjoyable to a point I would recommend it.

The Movie
"Thor: The Dark World" starts out a brisk pace but does slow down a bit toward the middle before coming to a rousing close and a great mid-credits teaser. As with the previous "Thor" movie and much of the "Avengers" film, Loki generally steals the show and makes it quite apparent that without him and Tom Hiddleston's superb portrayal of the trickster that Marvel movies would be less awesome. Quite honestly, the apparent big-villain of the movie, the Dark Elf Malekith, is just sort of there to be the evil-someone Thor and Loki must put aside their differences to fight. There is not much of interest to the character other than, "He's a bad guy," and really if this film does anything right with Malekith it is that through not having him be all that neat Loki and his relationship with Thor is all the more interesting and integral.
The major cast-members of the original Thor movie are all here, doing their usual quality job, although it still feels like an actor as established as Anthony Hopkins should have more to do than stand around and alternatively yell at or compliment Thor. Also, the potential romantic-rivalry between Sif and Jane Foster is hinted at but never really explored beyond a few jealous glances, which is quite the shame.

One other positive feature to this movie is that it spends a lot more time in Asgard than the first, showing us much of interest in this strange world of futuristic technology/magic and old-fashioned clothing. Between the Dark-Elves Star-Wars-esque space-ships and spears that shoot laser beams, it is an interesting dichotomy.

After all the fighting, explosions, and romance between Thor and Jane, at its heart this is arguably a movie about two brothers who alternatively are at each other's throats or watching the other's back, with their interactions making for some the richest and most interesting scenes. "Thor: The Dark World" may not be perfect with its dull villain and dragging along at certain points, but it without question is great fun and worth seeing for any fans of Marvel films.
4 out of 5 stars.
Posted by David Charles Bitterbaum at 4:00 PM