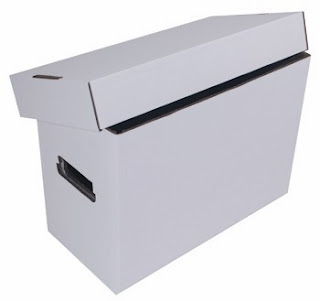 Okay, so my girlfriend and I moved recently from an apartment to a house we both bought. Being busy from that has resulted in less posting (I really seem to post in random bursts, I'm sorry) and soreness from moving around boxes and tubs. In the process of moving I came to see that probably the hardest time to own a lot of comics is when you actually have to pack it all up and transport it to a new residence. Whether it be all the comics you have in short-boxes & long-boxes, or the variety trade paperbacks and hardcovers you have to prepare, moving a bunch of comics makes changing homes even more of a pain in the neck.

Interestingly enough, the hardest things to move by far were some of the items I treasured the most--my big Absolute Editions and Omnibus collections of comics. I've built up a few of those deluxe books over time, and these big ol' honkers were extremely tricky to pack, mainly because their large dimensions made putting them in a small box impossible, and their weight resulted in some gigantic boxes that were wide enough to fit them being relatively under-filled because just having a small number of these gigantic books resulted in containers that weighed what was basically a metric ton.
All I can really say is that I truly thank God/Jesus/Muhammad/whomever for movers, because even if they can be costly it sure helps to have some strong folk to shift about your boxes of comics along with other objects in need of a truck such as beds, dressers, and the bookshelves that held all of the aforementioned comic trades.

In the end the only advice I can offer to people who have a lot of comics or graphic novels is to either sell a lot of their stuff before any of the times they move, or to just never move. Seriously though, I don't even have much in the way of comics out here in Missouri, at least compared to the nightmare of boxes and books back in my parents house in NY. Lord help me when the day comes that I have to move all of that stuff from my earlier years of comic-loving.
Posted by David Charles Bitterbaum at 1:34 PM