What My Girlfriend and I Thought of "Bioshock Infinite"

Press Start
I've previously discussed how I'll play video-games and my girlfriend, Samii, will watch if they have a good enough story. Also, like almost everyone else out there I bought and played "Bioshock Infinite". My girlfriend sat and watched anytime I booted it up and we both formed opinions that generally lined-up together, but not always. Anyways, let's share what my girlfriend and I thought of "Bioshock Infinite" in spoilery detail. 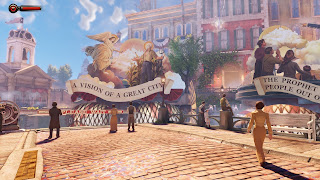 I want to point out that while I knew what the game was about, Samii went in pretty much blind. I told her it was about a city in the sky that followed an extreme view of what America should be. Also that I was going into it to rescue a girl named Elizabeth who then went around the city with me; other than that she had no clue what we were in for. From the start both Samii and I were amazed by the fantastic world of Columbia. This city floating in the sky was wondrous to see, with the populace going out their business casually whilst amazing technology floated around--such as the barbershop-esque group singing a Beach Boys' song. Speaking of that, Samii and I were always amused and intrigued by the songs from "the future" done in a style how songs were in the past. Hearing, "Tainted Love," as if sung by a dead-ringer for Cole Porter was just a treat. Columbia of course is not a perfect city. It is full of xenophobia and racism. When the character I was playing, Booker Dewitt, first sees a mural proclaiming how Columbia is the perfect city my girlfriend casually noticed, "Everyone's white." At that point I told her it was intentional and she began to understand that this seemingly-perfect city was far from it.

The time came in the first hour of the game where my character won the lottery, both Samii and I gasped upon seeing that Booker had "won" the right to throw the first tomato at a biracial couple. At that point Samii  no longer had any false notions about this city, she knew as I had from reading all the promotional material that this glistening metropolis was actually rotting from within with hatred. Also at this point in the game something happened that was talked about between Samii and I along with having been discussed in the gaming media extensively. Namely, the game got really violent.

Too gruesome?
Samii has seen me play some violent games, she doesn't mind the violence if it serves the story and isn't outright gratuitous. Once that first gruesome scene occured with a mans face being shoved into the spinning blades of a skyhook she and I both knew this game wasn't going to be stingy with the bloodshed. Seriously, it isn't pretty: 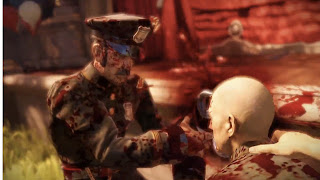 At that point I began basically rampaging through the city throwing fireballs, shooting off people's heads, and siccing swarms of crows on my enemies. Samii was about ready to quit watching it was so violent, but didn't because she was curious about the character of Elizabeth and really wanted to see me meet her. Therefore, while the majesty of Columbia had faded in fountain of blood, once Elizabeth was met both Samii and I became quite enraptured with the game again.

The Joy of Elizabeth
The amazing thing about Elizabeth in "Bioshock Infinite" is not just that she is an empathetic and well-written character. It also is not that she actually is programmed to be helpful and isn't annoying as most computer-allies tend to be in a game. No, its the fact that during the game you do something that all forms of fiction dream will happen--you genuinely start to care about her character, that is what makes her special.

From those first glimpses you get of her from the scientific-observation rooms to once you meet her, the vibrancy and personality possessed by Elizabeth just makes everything in "Bioshock Infinite" feel more alive. From her love of Paris and reading to being simply ecstatic upon the first time she hears live music, Elizabeth is more of a fully fleshed-out and fascinating character than some people I know in real life. As soon as I met Elizabeth in the game Samii wanted to start watching again. True, there was still the violence, but now between those loud incidents of gunfire and explosions there were touching quiet moments where Elizabeth and Booker talk. It doesn't matter if they are making small-talk about life and dreams or discussing deadly serious matters such as stopping Comstock, anytime Elizabeth and Booker have a conversation it feels natural, flows right, and otherwise impresses onto you how were it not for the fictional nature of the game these could be real people with their own interesting lives.
Once Elizabeth comes into the game combat becomes interesting--if still bloody --with her ability to open "tears" in reality. Plus, the story picks up a sense of urgency and what started out as a good game becomes an amazingly great one. That's why its all the more surprising when the ending arrives and its kind of, well, disappointing.

That's the Ending? Really?
Some people have absolutely loved the ending to "Bioshock Infinite", and I won't say they are wrong, everyone can have their own opinion. However, I felt though that the whole, "You are the bad guy, just from another dimension " twist was kind of a let-down. Then the game goes, "Oh, and by the way, Elizabeth is actually your daughter Anna all grown up!" and I really feel that the team behind "Bioshock Infinite" ran out of steam.

Samii put it well when she told me while the credits ran, "I haven't been this disappointed in something like these last 20 minutes since I read the last 20 pages of the seventh Harry Potter book." I didn't read the last Harry Potter book so I can't comment, but I agree it is a weak ending. Plus, the whole time the game was going on Samii and I were waiting for a romance to blossom between Booker and Elizabeth. Once we found out she was actually his daughter, Anna, that threw that plot possibility out the window if the story didn't want to become really creepy. When Samii also said, "It feels like they made the ending and congratulated themselves for being so clever when its really just kind of dull," I felt like we had some kind of mind-meld as I was thinking the exact same thing. Still, all the great times before the game comes to an end help make it so that the somewhat "meh" ending doesn't leave too sour a taste in one's mouth because so much fun was had for hours before.
Credits
"Bioshock Infinite" and its world of a floating city, alternate realities, and the amazing character of Elizabeth is an absolute joy to play. I've talked more about how the game made my girlfriend and I feel, but rest assured the game-play itself that goes with the story is a great time too. While much has been made of the question if "Bioshock Infinite" needs to be as violent as it is, I feel more people should be asking, "Why aren't there more great games with astonishing characters such as this?" We have these video-games that struggle to make us care about the main character or their friends and "Bioshock Infinite" pulls off the job of making you adore Elizabeth within an hour of meeting her. While the story may peter-out in the end, that doesn't change the fact how while you're playing the game and going on the journey of Booker and Elizabeth it is just an astonishing game. If you have a console or PC capable of playing it, you owe it to yourself to play "Bioshock Infinite". It is a marvel of a game despite my complaints and truly engrossing. I wouldn't want to live in Columbia, but boy was it a treat to visit it.

Samii's Rating: "I had a really fun time watching 'Bioshock Infinite' even if the ending was disappointing and the game was more violent than I thought it needed to be. I give it 4 out of 5 stars."