The Sheer Utter Madness of the Comic "Change" 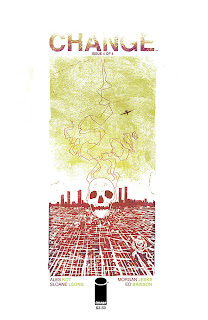 When I first read the description for, "Change" in Previews all those months ago, I had no clue it would be four issues of confusing, basically-indecipherable madness. I also did not know despite being horribly confused by the comic that I would like it.

Written by Ales Kot, "Change" features a screenwriter, a rapper, and some other characters who fight weird Lovecraft-style monsters. Also there is a spaceman, hallucinogenic flashbacks, and discussions about life between all the weirdness. Plus, the art and coloring is pretty cool with its shifting styles and otherworldly feel. 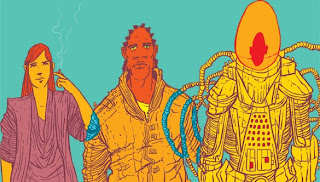 I really struggle to describe this comic, and it is annoying that I can't come up with much to say besides, "You should read it." I suppose I can tell you that if you don't like it you will probably hate "Change" as I've seen much negativity as well as positive opinions on the internet. The common complaint is how it doesn't make sense, but I feel like there is an immense density to the comic I'm just missing at times, and which others may have missed too. For example, one small thing I caught is that our rapper, W-2, has an album called "(f)lowers of Algerbong" which is a clever little reference to the book I love titled of course "Flowers for Algernon". That is just one tiny thing I picked up on that may well have gone over countless people's heads--which raises the question of how much in this comic went over my head? Now you see what I mean about the feeling I have of there being a lot of meaning I just might not be grasping.

Whatever the case of how much or how litter I understand of "Change" I do know that I enjoyed it. When the trade comes out before too long it would be worthwhile to at least give it a look and see if you enjoy it too.
Overall rating for all 4 issues of the mini-series: 3.5 out of 5 stars.
Posted by David Charles Bitterbaum at 1:00 PM