The Problem With Tyler Perry 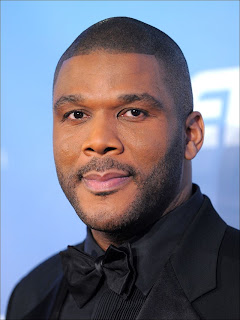 The problem with Tyler Perry is not that his work itself is popular, after all people like what they like. The problem is people don't call him out on the many offensive views he expresses in his work for a variety of reasons. Let's back-up though and discuss how I came to form my opinion of Tyler Perry and why it seems so many people are afraid to criticize him.

It started when I was reading an article on the AV Club about Tyler Perry that got me thinking. I write about race sometimes on the blog, be it race in comic-books or other forms of media. Perhaps it is my interest in equality and fairness that makes me have a big interest in racial matters--with my being involved in multicultural life starting back in college--where I was introduced to the works of Tyler Perry.

With Tyler Perry so much of his work has felt like biblical moralizing disguised as entertainment--sort of a "Veggie Tales" for grown-ups. I first developed this opinion when I was at college and a friend of mine from South Africa described how while she felt her country's independent black-cinema and plays were superior to anything put out by America, she made a exception for Tyler Perry's work, considering it golden--and yes, she was pretty religious. This friend would always be eager to watch a DVD of one of Tyler Perry's plays--before his stuff was made into movies there would be DVDs of the plays themselves, you see. Through this friend I saw a variety of Perry's plays but can't recall which ones were which as they all sort of start to blend together plot-wise after awhile (I have a funny clip on that in a minute). I know I saw, "Madea goes to Jail," because of how the character Madea...went to jail. Otherwise I just remember certain catchphrases such as, "Click-click, lock-down " which is said by a young girl in one of the plays who knows to tell boys abstinence is best (although she ends up pregnant anyways).
Some critics of Tyler Perry's work have more issues with how his movies/plays/etc. seem to be melodramatic, and have tonal changes so rapid within the same scene that a person can go from laughing to utterly depressed in the span of a few seconds. I read comic books though, and most of the time you can't find anything more dramatic than brightly-costumed characters spouting outlandish dialogue and pummeling each other, so I don't fault Perry for going a little heavy on the drama. I have never liked Madea though because she strikes me as a walking racial caricature with the "Loud and Sassy Old Black Lady" persona. It is just like a minstrel show came to life but black audiences aren't offended because it is done with some kind of hinted-at self-awareness (which Spike Lee made a statement about much more effectively with "Bamboozled").

As the AV Club article points out however, white critics are afraid to take Perry due to a fear of possible accusations of, "Not getting it," or even being racist. I'm white and have seen enough of Perry's work that I think I get his general message, and I'm not a racist, so I have little fear of having those accusations put toward me as other white reviewers apparently have. Hell, even black folk who have dared to critize Tyler Perry have felt his wrath. Anyone remember when the Boondocks mocked Perry in every way besides outright saying his name? Besides the fact the show summarized his general plot-lines with amazing succinctness:

It also raised some eyebrows for questioning Perry's sexuality. Frankly I don't care if Tyler Perry is gay, straight, bi-sexual, or something else, because I'm too busy being concerned about the messages his works themselves have.

"For Colored Girls" was a film written, produced, and directed by Perry that adapted the stage-play, "For Colored Girls Who Have Considered Suicide When The Rainbow is Enuf." I have not read the script to the play or seen it so I cannot comment on if it imparted the same message as the movie, but basically I felt that throughout the film Perry was saying, "Hey, black women, almost all black men are terrible people who will rape you, murder your children, cheat on you (with another man and thereby give you AIDS), and otherwise cause you to be miserable!"

Seriously, between the husband who throws he and his wife's children out the window to the man who assaults the woman he is on a 2nd date with whilst she cooks them dinner, the general message of this movie is that men, and black men in particular, are not nice. Perry is by no means pro-woman however. As I and the AV Club think, his works come off as quite anti-feminist, with the main female characters just needing "the right man" to counter the evil one they were with first--and of course it is a religious man too.

As I said, Perry seems to use the same plots with the same uncomfortable subtexts of how all you need is Jesus and a spouse who loves (and fears) Jesus and things will be fine. Perhaps it is because I'm not all that religious that Perry's themes of religiosity bother me. Maybe it is because I am pro-women's rights that Perry's, "Be submissive to your man," tone in his works irritates me. It could be the way Madea basically comes off as a racial caricature that bugs me. It could be and probably is all of these factors together.

As I said, the problem with Tyler Perry is not so much that his works exist and are popular--people can enjoy whatever they want--it is that people seem afraid to point out the unpleasant messages of his works, instead complaining about the aforementioned overwrought drama and messy plotting. Perhaps as more people of any color and creed realize it is okay to criticize Perry people will have discussions about his work, its positives and noted negatives. Just start talking, folk, that's all you have to do.

Email ThisBlogThis!Share to TwitterShare to FacebookShare to Pinterest
Labels: For Colored Girls Who Have Considered Suicide When The Rainbow is Enuf, movies, race, Sexuality, The Boondocks, Tyler Perry, Women's Issues