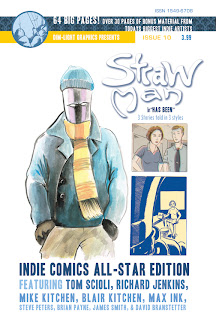 While I was at Wizard World Saint Louis I met David Branstetter and picked up a copy of the tenth issue of "Straw Man". I'm glad I did because I had quite the fun time reading this.

While various other independent comic artist get a section in this comic to show off their skills with various stories that sometimes do and sometimes don't relate to Straw Man, this issue is at its best when showing the "adventures" of our hero himself. I always have a soft-spot for heroes who suck at being heroes, and boy is Strawman an example of that. He's a hero who looks like a straw and  whom has no powers--which can be fine, Batman doesn't really have powers--but he also is just such a sad-sack. He's unemployed, his friends would rather he weren't around, and children insult him in the street. Straw Man is basically hated by everybody and does little more than mope around. 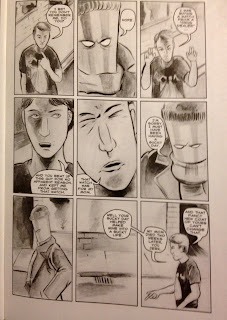 This may sound  depressing, but it actually is pretty funny. Branstetter gives Straw Man just the right amount of snark to make him not wholly pitiful, but also quite humorous. Straw Man knows people laugh at him, and he just brushes it off and doesn't care--well, he does care, but makes sure not to let it show. Plus the art is pretty good, which is a nice plus as sometime independent comics suffer from really bad art. Straw Man is both absurd-looking and carries a clear sadness behind his evocative eyes (the eyes do much emoting as he doesn't have a "mouth" per-se).

As I mentioned earlier, this issue has segments featuring other independent comic-makers to break up the bits with Straw Man. Some names are more recognizable than others (Tom Scioli of "American Barabarian" is growing in popularity quite fast) but those parts of the comic don't grab my attention as much as the main Straw Man bits. Still for $3.99 you do get a lot of content, so that's snazzy.

"Straw Man #10" is a comic I liked quite a bit. Whether it is my fondness for pitiful super-heroes or the dark humor is seeing Straw Man just keep losing this is just a good time. I would encourage anyone who likes jokes in their comics to read this along with anybody who enjoys super-heroes but wants something a bit quirkier.
4.5 out of 5 stars.
Go here to buy an issue of Straw Man.
Go here for David Branstetter's official website for his graphic-design company.
Posted by David Charles Bitterbaum at 10:34 PM