"The Grand Abyss Hotel," is Wonderfully Strange and Disorienting BOOM! Studios has a new original graphic novel they released this week titled, "The Grand Abyss Hotel." Part of the Archaia imprint is is written by Marcos Prior and illustrated by David Rubin. It is set in a world quite a lot like ours where technology dominates much of time and focus, the world economy is peril, and people are pissed-off. There is no single protagonist or antagonist, with the comic instead shifting its focus at different points to an assortment of people. Prior and Rubin blend faux-tech imagery and dialogue with some striking visuals and a healthy dose of symbolism as well. This creates an intentionally disorienting effect that mirrors what it is like to live in this telecommunications-saturated world.

Were I to say this book has any flaw, it would be that it has a wide-range of ambition and only so much space to cover a whole lot of talking-points. Certain questions are left unanswered (we never learn the identity of the masked-man at the book's start who goes and kicks off a great degree of violent uprising, to name one mystery) and the book has a somewhat optimistic ending considering how bleak things are for much of the graphic novel. That said, I'd rather read a book full of ideas and initiative which tries to cram as much as possible into its pages than something bland, and this book is massively creative in the best kind of way. 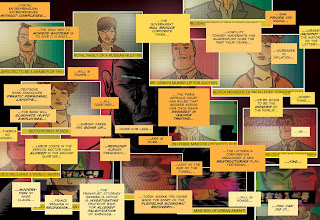 "The Grand Abyss Hotel," is a wild read. It is alternatively dazzling and dreary in its coverage of a whole lot of subject matter. I was entertained and found myself thinking in-depth about its subjects of globalization, media bias, and politics. To summarize, I loved it, and would highly recommend giving it a read.
5 out of 5 stars.
Posted by David Charles Bitterbaum at 2:06 PM