Grumpy Cat Has Died and This Makes Me Genuinely Sad 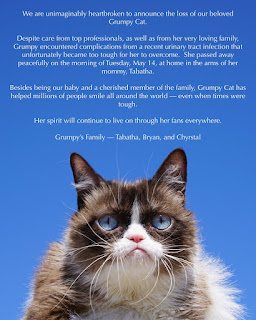 Viral internet sensation Tardar Sauce, or as she was better known, Grumpy Cat, has passed away at the age of seven due to complications from a urinary tract infection. Seven is a relatively young age for a cat to die, but she of course suffered from feline dwarfism which gave her that striking face that brought so much fame, and which can bring with it a variety of health problems as well. I always was amused by Grumpy Cat's shenanigans and actually owe her/her family a debt of gratitude. You see, the first comic to ever, "Blurb," me was the initial mini-series hardcover collection of, "Grumpy Cat and Pokey," that was published by Dynamite. On the back-cover none other than The Newest Rant is quoted as loving the first mini-series to feature the sour-faced feline (and I did enjoy it immensely). Even though Tardar Sauce/Grumpy Cat herself of course didn't pick me to be blurbed on the comic dedicated to her and Pokey's adventures (Pokey was her real-life brother/housemate), without Tardar Sauce/Grumpy Cat there never would have been a comic for me to review and be quoted by, and for that I thank her for existing and bringing us all joy.

I have since seen myself quoted on other published comics now and then, but Grumpy Cat always had a special place in my heart, and I also appreciated that she, "Followed," me on Twitter. Yes, she followed about 53,100 other people, but considering she had 1.5 million followers I still felt pretty honored. Tardar Sauce/Grumpy Cat was not on this Earth for long, but she touched many lives with her unique expression and all the memes, books, comics, and even movies inspired by her perturbed visage. I am sending her family good vibes and wish them the best during this stressful and mourning-filled time.
Posted by David Charles Bitterbaum at 8:48 PM