Awhile ago I said how I had complicated feelings about CGC and comic grading/encapsulation in general. As I've gotten older and wiser I see how it has its uses and for some rarer comics or ones in really good condition it can be a good idea to keep them from falling apart over time. I had two comics I wanted to get graded but my hope was to make sure they were in stellar condition before I submitted them. I've heard about comic-book pressing and dry-cleaning in regards to how it can assist comics with some assorted issues (aging defects, spine roll, and so forth), but if I wanted pressing done I had zero idea whom to get help from. Should one look around online there are services that range widely in price, speed, and reviews, so it can be hard to know who to turn to for pressing. With this in mind, I asked some of my assorted comic-selling friends who have a lot more knowledge about comic-pressing and CGC grading than I do. My chum Justin of Wayne Kent Comics had plenty of glowing things to say about Chris, "The Comic Book Presser." 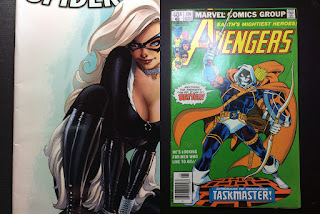 I reached out to Chris and he walked me through the form on his website you fill-out to be sent an invoice for his services. I then mailed him two comics. I sent him a Mexico variant of, "Amazing Spider-Man #11," featuring a J. Scott Campbell cover of the Black Cat that also appeared on a, hard-to-find, "Superior Spider-Man," cover in America (I got this as a present from my awesome friend who lives in Mexico and I trade comics with, Oziel). I also sent-in a copy of, "Avengers #196," which features the first full appearance of Taskmaster. The above pictures are from before the press. As you can see the Spider-Man comic is in mostly great condition but has some spine issues from my own occasional rough-handling, while the Taskmaster appearance has a number of concerns here and there that were evident when I bought it. It took about 4 weeks (I didn't pay for a rush-order which is an option, but I was good with the standard time) and my books came back as such: 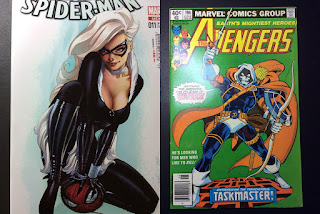 The Spider-Man cover looks even more gorgeous and has nary a defect I can spot, and my, "Avengers," comic looks incredibly better--especially in regards to the extensive spine-roll it earlier suffered from. I look forward to submitting these to CGC for sure--I have no intention of selling the awesome Black Cat variant but think it would display wonderfully in a CGC case with a high grade. I may sell the, "Avengers," once it is graded as Taskmaster is getting more and more speculation heat lately. I found Chris' prices extremely reasonable compared to some quotes I'd seen online from other pressing services and am extremely pleased with the result of his work. I also was happy he kept in touch during the pressing-process, letting me know the books had arrived, when he was shipping them back, and so forth.

I'd eagerly recommend The Comic Book Presser to anyone who is interested in having their books pressed/dry-cleaned/otherwise fixed-up before getting them graded, or simply if they want them to look snazzier. I want to thank Justin for his recommendation and Chris for doing such a superb job with my books. I look forward to getting them back graded and am excited to know they'll without a doubt grade much better thanks to Chris' hard work.
Posted by David Charles Bitterbaum at 10:05 PM