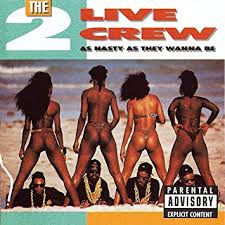 If you remember the 1980's and 1990's or have at least read about them you probably are aware of 2 Live Crew. They were a rap group that often had lyrics about enjoying sex and how they were always horny. Their 1989 album, "As Nasty as They Want to Be," resulted in all kinds of legal fiascoes and Governmental debate when it was accused of being obscene and the group became outspoken pioneers about freedom of speech, with group member Luther Campbell spending the years after as an activist for numerous causes afterwards. In retrospect it all is kind of funny as now in 2019 we have a group such as City Girls with their own raunchy raps outraging critics. The more things change the more they stay the same.

I have no problem with sexy music and enjoy it when it is done well--just as I like, "Clean," songs done with skill. I also have zero issues with groups like City Girls being two ladies (Yung Miami and JT) outspoken about their sexuality--if a man can sing and rap about loving sex so can a woman. It just makes me giggle a little to think how in 1989 people were up in arms over, "I'm like a dog in heat, a freak without warning/I have an appetite for sex, 'cause me so horny," and now everyone continues to be mad at sex-lyrics with City Girls going, "Move it, baby, lick it, baby (do it)/Suck up on that clit until that pussy got a hickey, baby." Just as 2 Live Crew incurred some wrath I bet if City Girls were spitting these verses 30 years ago it probably would've made Tipper Gore (of the Parent's Music Resource Center) go mad with rage to the same degree.

One irony in this would be how much of the same forces that were so outraged at 2 Live Crew are mad at City Girls, yes, but now they are using different phrasing in an attempt to achieve the same goal of trying to shame the artists/cause outrage. With 2 Live Crew the refrain was, "How dare they objectify women and expose our children to this unmoral garbage?" and with City Girls it is, "How dare they present their sexuality so loosely and expose our children to this unmoral garbage?" When 2 Live Crew was saying how much they liked sex they were debasing women, when City Girls  are eager to say how they like sex, they are bad examples for women (who are supposed to be pure and virginal)--basically, no matter who is doing the rapping it is all about a weird patriarchy where women should never be expected to enjoy sex unless it is in a heterosexual marriage.

With the art-form of music sometimes there is content for all ages and other times the lyrics can be decidedly adult. It is up the musician making the tunes how clean or raunchy they want to sound, and even if vivid dirty-talk upsets some critics prone to, "Moral panic," both 2 Live Crew and City Girls have the right to discuss their love of sex over fun beats regardless of if they're men or women. After all, if you really don't like the song you are quite capable of changing the radio dial/pressing next on Spotify.
Posted by David Charles Bitterbaum at 1:45 PM