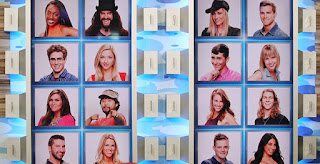 I had a depressing post earlier today so let's talk about something more fun than saddening. "Big Brother," is a show I love to watch. In the few seasons I have viewed it there have been some where the cast gets extremely emotional quite easily and that results in drama, or there have been seasons where there was actual hate occurring in the house thanks to racism so bad CBS actually had disclaimers before each broadcast about how the views of some contestants did not reflect that of the network. That makes it seem all the stranger how the cast this season seems to be for the most part reasonable and nice.

This season of Big Brother had the first ever openly transgender contestant in the form of Aubrey, a young woman who found only support and love in the household upon telling everyone. She got voted-out earlier-on in the show, but due to the fact she was playing the game terribly as opposed to people disliking her for hateful reasons. Within this season of Big Brother there are cast members who are dating someone of the same gender and the house hasn't batted an eye. There is a bit more diversity this season and an Asian-American man named James who was adopted by a Southern family and speaks with a dirty-South drawl got the most surprised looks from house-guests, but after the initial shock of a self-described, "Asian Redneck," he has gotten-on well with everyone too. Frankly, the only time things got particularly intense was when it appeared James might get into a fight with another house-guest named Clay who was arguing with him because James actually played the game of Big Brother and made some big moves (he nominated Clay and Shelli to go home, and they were a, "Showmance," couple who couldn't fathom the thought breaking-up their power-coupling could appeal to the house).
It is just so odd for there to be a season of, "Big Brother," where the cast are doing the usual activities of forming alliances or double-crossing each other, but actually feeling the need to apologize after metaphorically stabbing someone in the back, and telling them how they love them as a person and it isn't personal. The most surprising thing was how one contestant had a twin whom has now entered the game, and the house was pretty cool with the fact she had been lying about trading-off with her at the start of the game.

Some seasons of, "Big Brother," have felt like utter madness with breif bouts of quiet. This season has been more like a long lull with sudden twinges of action or unease--such as when James and Clay clearly weren't getting along, or Aubrey's game-plan of making an alliance with everyone in the house and then lying about it blew-up in her face. It's perfectly alright, there is still plenty of intrigue and the competitions are fun to watch, but as my lady put it, "Wow, this is actually kind of a bit boring this season."

The Need for Drama
Perhaps this season is an outlier of the usual formula where once you lock a bunch of strangers in a house it doesn't take long for them to become mean and a little stir-crazy. I guess it goes to show there are plenty of people in the world who are just nice and pleasant, whether locked-away in a house competing for $500,000 or free in the regular world to be their cool selves.

Still, this makes it apparent there is one thing this show thrives upon, and that is drama. The seeming drip-feed of anything shocking or startling has resulted in a season of, "Big Brother," that while enjoyable can sometimes feel a bit slow, or grasping at straws to fill air-time. We are a bit more than half-way through the season so time will tell if things are going to ramp-up as the number of house-guests shrinks down and folk get more antsy about that half-million. For now though, it is both positive to see a cast who are nice and mellow, and admittedly a bit dull.
Posted by David Charles Bitterbaum at 3:52 PM