I Saw a Great Javier Mendoza Concert This Evening 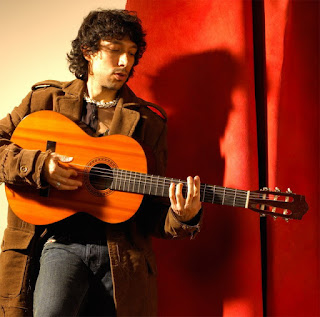 I don't always discuss music on the blog as much as I would like, as I clearly love auditory delights and enjoy talking about them. I'll work at writing on music a bit more and thought I would begin by discussing how I saw a superb concert this evening which involved Javier Mendoza playing a set that was a bit over an hour long. He jammed with some other talented individuals at a location known as, "Jazz at the Bistro," a nice lounge/restaurant/music-venue and true to the location's name gave us some great jazzy-tunes with a strong Spanish influence.

All the songs were sung in Spanish but little brochures with translations of the lyrics were supplied and the instrumentation itself was superb too. From the more sad songs such as, "La Sangre/Blood" to his peppy song about Bacardi and Coke that he jokingly told the audience was going to be in an ad but didn't work out, "So order a Bacardi and Coke and maybe a promoter will see it could work!" it was a great show.

Afterward he ventured out into the audience and happily interacted with anyone who wanted to say hello and/or buy a CD. I always appreciate artists who enjoy speaking with the crowd after their show as opposed to disappearing as soon as their set is done, so that was quite cool. He was a really nice and pleasant guy, so between the great voice, expert instrumentation, and kind personality, I was quite impressed and will seek out more of his work in the future! You can learn more about Javier Mendoza here at his official website and I would encourage you to do.
Posted by David Charles Bitterbaum at 11:14 PM