It Occurs To Me I Haven't Really Talked About "Secret Wars" or this "All New, All Different" Marvel Universe 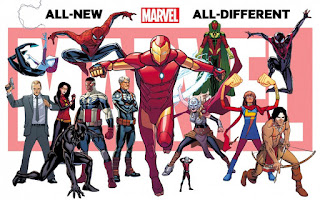 I realized something as June ended and we entered the first day of July: I really haven't talked about "Secret Wars" much at all. The main reason for that is basically I'm not reading it. To make matters more troubling, I'm honestly not overly excited at the, "All New, All Different," Marvel Universe either.

I mean, yes, I was getting the Marvel comics I enjoyed and some of them tied-in with "Secret Wars" (I'll miss you, "Captain America: And the Mighty Avengers," although this "Ultimates" comic sounds like it will have a similar cast and the same writer in Al Ewing). Seriously though, it is just far too big and too expensive a thing for me to feel I can successfully follow it. I was reading some comics that led into it, enjoying "New Avengers" and the like, but as I've been more careful with budgeting I really am just reading less Marvel, and now just a little DC occasionally (although some of their new stuff is snazzy and maybe worth following).

Why Is it Hard to Summon Excitement? 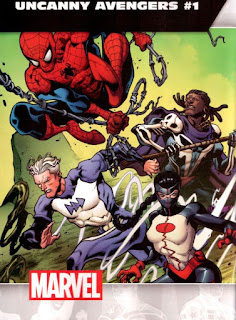 Perhaps it is my eventitis that makes me feel it is okay to miss-out on "Secret Wars", although I'm not positive that is it. One concern that makes me less interested might be how it seems "Secret Wars" is becoming a delayed mess approaching, "Civil War"-levels of extended waiting for comics, although some argue a delay shouldn't hurt too much.

As for the, "All New All Different," Marvel Universe we're getting (don't call it a reboot, lest Marvel get angry), some things do sound interesting--such as Warren Ellis writing a comic about the Inhuman Karnak--but I just feel that when I'm looking over the full list not too much grabs me in the way titles would in the past. I just see the solicits and go, "Oh, another Avengers team of various heroes we don't always see working together? Okay," or I state, "Venom is in space now? Hm." There is some solid stuff (more "Howard the Duck" is welcome, as well as Jason Aaron and Chris Bachalo on "Doctor Strange") but a lot of things just have me shrugging. Other than Ellis writing Karnak the only other title I see myself super-excited to try out is a "Squadron Supreme" comic that sounds kind of like the classic series, "Exiles," but with members of (what else?) the famous super-hero crew originally from various Universes. Perhaps that is because I've always found the ol' Squadron to be neat when written well by various talents. Plus, I loved "Exiles" when it was going well.

Still, why is it hard to summon excitement? I don't know, honestly. It could be the eventitis, it could be the delays, or perhaps I'm just annoyed with continuity often bogging things down as well as changing in my tastes as an individual to wanting to read more titles from other publishers in addition to the stuff from the, "Big Two," of Marvel and DC. I'm not sure what makes it more difficult for me to be as interested in Marvel's going-ons (as well as DC's) because when they put out something I like, I still really adore it. It just seems things are more hit-or-miss for if they'll get my attention these days.

In the end there is still plenty of good stuff coming out from Marvel before this re-launch (again, they decry it being called a reboot) and there will undoubtedly be some great stuff after...just maybe not as much that intrigues me as in previous years.

Posted by David Charles Bitterbaum at 12:04 AM