Rant-Reviews: Everything Old Is New Again with Oni and Boom!

Back to the...Past?
Sometimes we as human being like nostalgia. I mean, I wrote a post about the power it has not too long ago. One thing I really appreciate however is when you can give a reader a dose of the past but throw in an interesting twist to keep it fresh. Both Oni Press and BOOM! Studios have some titles coming out that riff on past ideas while putting a new spin on things, so I thought it would be fun to review them!

Old-School Monsters and Aliens from the Early 2000's 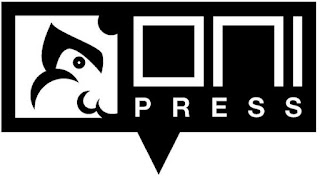 Godzilla and other famous monsters have entertained us in various forms of media for quite some time, and when I was a young gentleman I was quite a fan of "Invader Zim" and upset when it was cancelled. Therefore, with my affinity for big monsters and humorous aliens it is quite delightful for Oni Press to be putting out two comics that have them both!

Kaijumax #4
Zander Cannon has the strangest title here, as I've discussed. Bright and peppy artwork combined with a clever concept--a prison-island for gigantic monsters, meets with some dark and gritty and violence as well as scary overtones. Cannon may go just a bit too far this issue, riffing on the concept of shower-rape in prison but without actually using that word or having it be quite that. The balancing act he does every issue between funny and gruesome unfortunately dips a little-more into the grotesque this issue. That's alright though because overall this has been quite the solid series (I didn't review it, but I loved issue #3) and other parts of this comic continue to be intriguing as we learn more and more about the prison's residents and staff. Not my favorite issue, but definitely a series to keep watching.
3.5 out of 5 stars.

Invader Zim #1
Well darn, this is difficult. You see, I have such a fondness for the original "Invader Zim" television show done by Jhonen Vasquez (of "Johnny the Homicidal Maniac" fame) that I worry my love of that program could result in my either automatically adoring everything within this book because it is finally more Zim...or I could despise this comic because nothing could live up to my expectations. Well, putting aside any possible "baggage" my love of the original show entails, I do have an opinion on the comic itself: it is quite fun!

This first issue of "Invader Zim" tackles the fact plenty of people are unaware of Zim by simultaneously filling-them-in and making fun of overwrought continuity by having a character known as the, "Recap Kid," explain the basics of "Invader Zim" and the title character's arch-enemy, Dib. The comic acknowledges how it, "Feels like years," since we last saw the characters and otherwise picks right up where we left off with Zim and Dib constantly engaging in a battle of wits...that both fail miserably at as they are utterly incompetent. It has a fair share of hilarious moments, its appearance is reminiscent of the original program, and it is overall a great read. If you're a fan of the original "Invader Zim" when it was on T.V. or just looking for a good dose of humor, this is without a doubt worth reading.
4 out of 5 stars.

BOOM! Studios has their comic, "Oh Killstrke" which has been delightfully mocking the 1990's era of comics whilst simultaneously displaying a sense of affection for them and just came out with the first issue of "Strange Fruit" which has had a fair degree of hype from them. I quite like one and am a little let-down by the other.

Oh, Killstrike #3
From his introduction in the first issue, Killstrike has been lovable as a pastiche of the worst excesses of the super-hero comics of the 1990's and the comic itself has been delightfully wild in its mocking of super-heroics, from the jokes about market-speculation in the first issue to giving a good ribbing to other publishers for their tendency to "fridge" female characters in the second issue. The third issue gets even more meta by making fun of how comics actually lately are maybe too meta! Writer Max Bemis goes so far as to call himself out for being one of those, "Minor celebrity," creators (it seems he is well-known for the band "Say Anything") in a fascinating rant that comes from one of the characters about how its gotten so bad in comics people can't just honestly enjoy something. No, instead they have to be hipsters who enjoy things ironically but with a hint of earnest love for the medium of comics (it is stated). I've been really enjoying this riff on the comics of the 1990's and how they impact the comics of today--I especially loved this issue and how it broke the 4th wall so that it could make fun of comics that break the 4th wall. Delightful stuff!
5 out of 5 stars.

Strange Fruit #1
I am generally a big fan of Mark Waid, and J.G. Jones has turned in some solid work too. This comic also was hugely promoted with how it took the concept of Superman but apparently turned it on its head by making the Superman-analogue black...not actually that shocking as it is something which has been done plenty of times (I can think of plenty of examples) and setting him in the past when people were racist--with the idea of a super-powered black-man scaring white people being a little less common...in that I can only think of two recent examples off the top of my head ("Uber" has touched on this, and "The Blue Marvel" when he appeared in his original mini-series riffed on this too). Still, even if the idea isn't as original as BOOM! may have made it out to be, that still is a good creative team, so how is the comic?

To answer about the comic's quality: Eh, it's alright. I find I strongly agree with this article by Dominic Griffin in which he discusses that while "Strange Fruit" is by no means a wreck, it is a disappointing comic in that it doesn't live up to what readers could hope for. It basically just follows the tropes of, "Here is the racist south, a space-ship has crashed, the alien is black, aren't you shocked?" before concluding the debut issue with our supposed protagonist saying nary a word. It is all perfectly passable entertainment even if I find J.G. Jones painting in this to be a bit over-done in that it has that uncanny-valley feeling I'll often get from Alex Ross. Should you be a fan of that style of artwork your mileage may vary. It is quite possible that as things continue this could turn into something great, but for now I'm underwhelmed.
2 out of 5 stars.

New Dogs with Old Tricks
These comics taking concepts and ideas that are older and making adventurous ideas from them really is like a case of taking an old dog and teaching it new tricks. I like it, and even if it doesn't always succeed completely, it can result in some interesting tales.
Posted by David Charles Bitterbaum at 7:05 PM