The Masterpiece of "Zero" #18--Several Interpretations of it's Conclusion 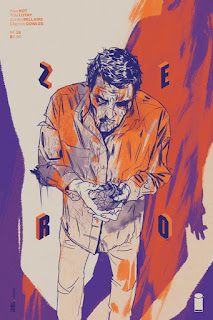 The 18th and final issue of "Zero" came out some weeks ago, featuring writer Ales Kot and for this issue Tula Lotay (the artist purposely changed every issue). I read it, absorbed its majesty, and have to say it is a solid contender for being arguably the best single issue of a comic this year.

From the first issue of "Zero" this was a great read. We had the debut showing how we would see various years in the life of a young boy trained to kill by the military before breaking free, followed by when things got weird with a surreal fungus that infected people and basically invaded their very body and psyche, to it all got even more bizarre with concepts of multiple universes, everything evil being embodied as a parasitic force, and general insanity. It is funny to think how it really started out seeming to be a straightforward military-type yarn about kids trained to kill, before spinning-off into a surreal tale of shared consciousness and the debate over what in fact makes us human. It is remarkable, just amazing.
The conclusion left a lot up to interpretation and I have several theories. Now, if you haven't read the series a lot of what I have to say will be confusing so what I would recommend is going out and getting all the single issues if you can or buying the 4 trades should that be easier. Then read those and see if you agree with my various takes on the story.

Interpretation 1: It's what it looks like at first blush. 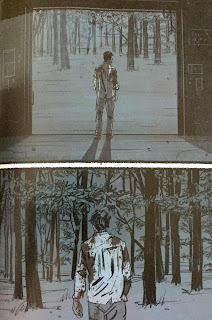 Edward Zero defeats the parasite of evil, the fungus heals his wounds, dissolves, and he goes on to live a happy life of quiet solitude with the woman he loves, having prevented a dark possible future he witnessed where the evil aspects of the fungus spread and ruined the planet. It's happy and it is relatively simple. 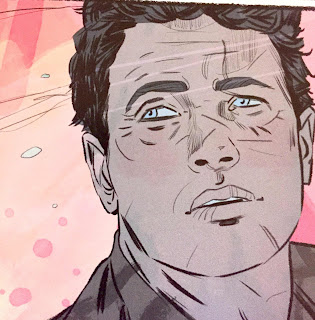 Once Edward is freed from the fungus and goes about a happy life things seem almost too serene. The family he steals the clothes from strongly resembles the family of the man he was sent to kill in as early in the series as the 2nd issue. Other hints of past events pop-up. It's evident that Edward may have defeated that evil force, but is still a part of the fungus, having it show him what he wants to see so that he can live a, "Happily ever-after," even though after a life of so much misery and bloodshed that may not truly be possible. After all, if the fungus could show him a potential future where he is an old man narrating the entire story we read to his son, it would make sense for the fungus to give him his joyous ending as thanks for destroying the evil parasite that would have ruined the planet. It's depressing and not too complicated, a darker alternative to my first interpretation. Plus, one element makes me think this or my third idea are correct. Namely: Edward's eye.

Interpretation 3: The Fungus Sent Him to Another Universe...Somehow 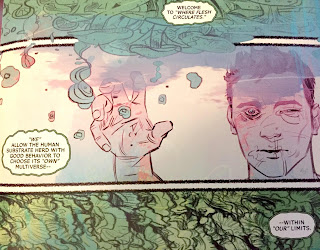 At the end of the comic Edward has two working eyes. Early in the series he lost one eye. How could this be possible unless he is still in the fungus, or if my third thought about the series holds true. I would think that seeing as how the fungus stated that it is in various Multiverses, and even claimed that because Edward was helpful to it he could choose one, could this be a world where he has both eyes? Perhaps this surreal multiversial fungus literally transported his essence to another world, and then sent him off, kind of like in interpretation 1, but with the element that maybe all these references to the earlier events appear because in this multiverse things went a little bit differently, a tad better.

Edward Zero is maybe not in his "real" world, but he's in a better one (for him, at least), and for that reason he doesn't care how real or fake his existence is, as really we are just come from the fungus and turn into the fungus. It's extremely dense, both happy and sad, plus it is pretty far-fetched, except for the question of that darn eye throwing a big wrench into the first interpretation (unless the fungus could fix his eye or such). Hence, I like this interpretation I came up with the most.

The Correct Answer Is? 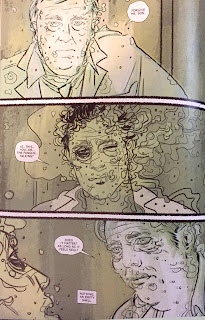 I am not certain if one of the, "Takes," I came-up with for the final issue is more accurate than the others, but I personally like the strange, metaphysical nature of the 3rd interpretation and like to think that is how things "really" occurred. I would also say with the utmost certainty that Ales Kot purposely wanted to leave things vague, as much of Zero has been told in way that readers can draw their own conclusions about a variety of elements. I mean, he says it outright with the line, "It's all theatre." 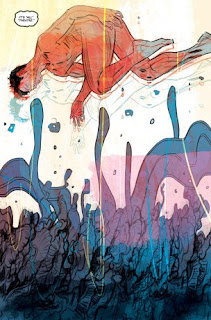 That is just another element that has resulted in me loving this title so much, with the complex nature, experimental style of changing artists every issue, and overall deep-thought clearly put into each issue all being elements that result in a beautiful piece of artwork.

From writer Ales Kot, to his artist collaborators, and colorist Jordie Bellaire who helped maintain a continuity-of-appearance despite all the disparate art styles, this is just a superb comic, and one I'm glad to have been with from its first issue to this final 18th. Without a doubt this comic has earned...
5 out of 5 stars.
Posted by David Charles Bitterbaum at 12:08 AM