Rant-Reviews--Let's Talk About Our Feelings

Comics make us feel emotions, at least when they are doing their job they should. Whether we relate to the emotions of the characters or have our own sentiments after reading a story, if you don't feel something after reading a comic, I would argue it didn't fully do its job. After all, any comic--nay, any piece of entertainment--should garner some sort of sensation, as opposed to being the mental equivalent of eating a rice cake--e.g. dry, dull, and boring (although I do like rice cakes with a hint of salt, work in a comic metaphor however you can from that). I'll be rating comics not just with my usual stars, but with to what degree of, "The feels," they cause with that term referring to a wave of emotions a person experiences while enjoying a piece of entertainment.

Comics That Result In, "The Feels."
Starve #1
Brian Wood is of course a writer that I now feel slightly icky about when I consider things that came to light not long ago. Still, he can be quite the solid writer, and "Starve" is an interesting comic that reminds of other things--possibly to a fault.

Take a dash of a comic about unfair division of classes (so something like Greg Rucka's "Lazarus"), thoughts on a future full of privatization and weird technology (shades of Warren Ellis' "Transmetropolitan"), our cultural obsession with cooking competitions (most of what is on the Food Network these days) and add just a dash of dark humor about how human beings love being awful to each other (a forte of Garth Ennis). These are all solid ingredients, but while reminding of so many other things, "Starve" struggles a bit to carve out its own identity.

The thing that keeps it from feeling like an utter mish-mash of concepts loosely congealing together is that the protagonist, Gavin Cruikshank, is just the right mixture of unpleasant and empathetic that readers should care about him. Someone who has been at the top, fallen to the bottom, and sees the injustice in the world but actually has a chance to do something about it, Gavin is a neat fellow. Were it not for Gavin this comic wouldn't have too much of a pulse, but Wood has a great character in him and that results in a comic I am interested in enough to want to keep following, for now at least.
3.5 out of 5 stars/"feels".

Material #2
The first issue of this Ales Kot written comic really grabbed me. It was fascinating with how it had these various unlinked (for now) stories, mentions of other media we could consume that related to what was going on the in comic, deep talk about the meaning of life, the (lack of) liberty, and our world's obsession with technology. This issue has the same, but feels like a little less of a shocking punch-to-the-gut as that debut.

It is still amazingly good, and I bet as we build to a conclusion I will love this series even more. For now though, it is a fascinating read not quite as wild as the first issue, but still capable of making readers feel a lot of emotions, many of them sad and hopeful as we witness these people suffering difficulties and dream that everything will work out for them...although it most likely may not.
4.5 out of 5 stars/"feels".

Annihilator #6
Grant Morrison's "The Filth" is arguably my favorite comic, ever. "The Multiversity" is probably my favorite thing he has finished this year. So, what is "Annihilator"? Well, its a good comic that riffs on the concepts of how we as people tell stories, without being as meta as "The Multiversity" got, as the main idea is our protagonist has to write a story before he dies in order to survive. This somewhat-delayed final issue wraps everything up in a nice and clean manner while at the same time mocking stories that wrap everything up nicely. It is a solid series, made that extra bit enjoyable by the superb art of Frazier Irving. Morrison makes readers think with this story, but Irving's stark and creepy artwork makes you feel.

Irving can make even a moment of seeming calm seem unpleasant and eerie--and I mean that as a compliment. The surreal space-monsters that Irving drew throughout this series and the new beings we meet within this issue took this comic from potentially being a good science fiction story straight into the realm of a really good sci-fi-horror yarn. I'm not sure who brought out the best in whom of the creative team, but the combination of Morrison and Irving takes something that would be good, and makes it great--in addition to full of the feels.
4 out of 5 stars/"feels".

The Wicked and the Divine #11
This came out some time ago, with the release of the next issue not far off (i.e. this week), but I just wanted to share some brief thoughts on the end of this particular installment of "Wic+Divine." Namely how upon reading the issue I wanted to shout, "Oh my God, that ending was insane!" Oh, and also how felt the urge to exclaim how, "I honestly have no clue what happens next!"

Seriously though, Gillen utterly shocked me with the events of this comic and has me hooked more than ever on this amazing title. The sheer shock, surprise, and confusion I felt reading this defines what it means to have, "The feels."
5 out of 5 stars/"feels". 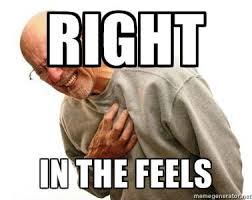 Some comics inspire more "feels" than others. This can be a good thing and a bad thing, considering how something like "Annihilator" is enjoyably scary and fun, but "The Wicked and the Divine" just leaves you emotionally drained (that ends up being a good thing, however). At the end of the day, I would rather read a comic that makes me feel ways I'm not always comfortable with (sad, angry, etc.) than a comic that leaves me feeling, "blah." I imagine most readers would too.
Posted by David Charles Bitterbaum at 11:26 PM